The quirky brick building at 39 Stanhope Street was originally constructed as a stable, but its evolution in use illustrates the changing dynamic of its vibrant neighborhood. Stanhope Street is a narrow street between Berkeley and Clarendon streets in the Back Bay that was laid out in the 1860s when the marshy area was filled for development. As more residences were built in the Back Bay, stables were necessary to house the common means of transportation- horse and carriage. The keystone over the entrance bears a “P” in reference to Jacob Pfaff, the first owner of that stable. By the 1920s and early 1930s, as transportation technologies advanced, the stables were converted to auto repair shops or warehouses. In 1938 a restaurant opened in the space, which has been a series of different restaurants since then.

Though this series of low-rise, brick buildings are not the type of high-style buildings typically considered historic, they are important vestiges of daily life over generations in this part of the Back Bay. With development threatening nearly every corner of the city, Boston is losing the vernacular and quirky little hidden spots that are essential to the city’s charm and unique character. We feel that a balance of new and old, big and small creates the most vibrant and pedestrian-friendly parts of the city where people want to be and we have therefore urged the owner of 39 Stanhope Street to reconsider outright demolition of the building. We fear the loss of this section of the block would set a precedent for demolition of the rest of the streetscape which would be a meaningful loss of character and sense of place for this neighborhood. It may be possible to find a solution that preserves certain elements of the building while accommodating the owner’s vision for a new hotel. In this instance we do not feel the proposed height is of concern given the many tall buildings that surround it, but we would prefer a solution that retains the existing building’s unique facade. We hope to collaborate with the community, the City, and the owner towards that end.

Alliance staff touches base with the project team. There has been no significant movement and much seems to await Boston Landmarks Commission decision on the Landmark petition.

The Alliance submits a comment letter to the BPDA, attached below.

The project team presents to the Alliance’s Advocacy Committee.

The project team gives Alliance staff an update on the project, which has been redesigned to include the preservation and restoration of the facade of the stable building with a new hotel behind and above. This is the direction that the Alliance encouraged the team to take in previous meetings. Staff provides feedback on elements of the design.

The Alliance submits a comment letter, attached below, that supports the petition to further study this property for Landmark designation.

The Boston Landmarks Commission holds a hearing to consider accepting a petition to further study the stables at 39 Stanhope Street for Landmark designation. The petitioners give a presentation about the historic significance of the building. The owner of the property is provided the opportunity to comment, and also presents information about the site, claiming the building is not significant enough to be a Landmark. Alliance staff speaks in support of accepting the petition. The Commission votes unanimously to accept for further study a petition to Landmark the property. This hearing is the first step in the process; the next step requires the preparation of a study report before a future hearing to officially designate the property a Landmark, pending the approval of the Mayor and City Council. Letters of support for Landmarking the structure can be emailed to BLC@Boston.gov.

THIS MEETING HAS BEEN POSTPONED. The new date will be added when announced.

A Preliminary Hearing will be held by the Boston Landmarks Commission to discuss and vote to accept for further study a petition to designate the Richards-Follettt-Pfaff Stables, located at 39 Stanhope Street, as a Boston Landmark. The meeting begins at 6:00 p.m. at Boston City Hall, room 900. Letters of support in advance of the meeting can be emailed to BLC@Boston.gov. If the petition is accepted at this meeting, BLC staff will conduct further research into the historic significance of the site and make a presentation to the Commission at a future meeting where the Commission will vote to Landmark the site. The February 25th meeting is the next step in the Landmarking process, but this is not a vote to Landmark the building.

The Boston Landmarks Commission considers a survey rating upgrade to determine if the building is historically significant beyond the local level, a necessary requirement for Landmark eligibility. BLC staff presents information about the history of the site and Back Bay residents emphasize the building’s importance to the neighborhood. A motion is made and approved to elevate the survey rating.

The Alliance meets again with the proponent to revisit ideas to incorporate the facade of the stable building into the hotel project. The proponent maintains that none of the options are feasible and plans to move ahead with demolition. The Alliance agrees to disagree, feeling that there are viable options for a successful hotel project that incorporates and celebrates the existing building and that the stable is a character-defining feature in this streetscape that should be preserved.

The Alliance meets with the proponent to discuss the project and any alternatives to demolition that have been analyzed. The proponent presents three preservation schemes and their preferred option, which is complete demolition and new construction of a hotel. The preservation schemes include reconstruction of the facade- either just the front wall, the front wall and the mansard roof, or the front wall and roof with an open space behind that forms an arcade, or courtyard space, in front of the entrance to the hotel. The proponent described challenges with all three preservation schemes and questioned whether it would be worth saving the facade at all. The Alliance offered suggestions for other ways to make a preservation approach viable in order to preserve the historic streetscape. The proponent acknowledged that the loss of this structure would likely be a catalyst for demolition along the rest of Stanhope Street and agreed to look again at alternatives to complete demolition.

Alliance staff meets with the owner of the property to discuss the proposal and potential alternatives to demolition, namely incorporation of the facade into the new project. We emphasize the benefits of the unique facade to the community and as an opportunity to define the proposed hotel. The proponent agrees to discuss with the architect and consider our request.

The proposal is discussed at the Alliance’s board meeting.

A Letter of Intent is filed with the Boston Planning and Development Agency. The letter is available below.

The Alliance hears from members of the community with concerns about the potential loss of a stable on Stanhope Street. 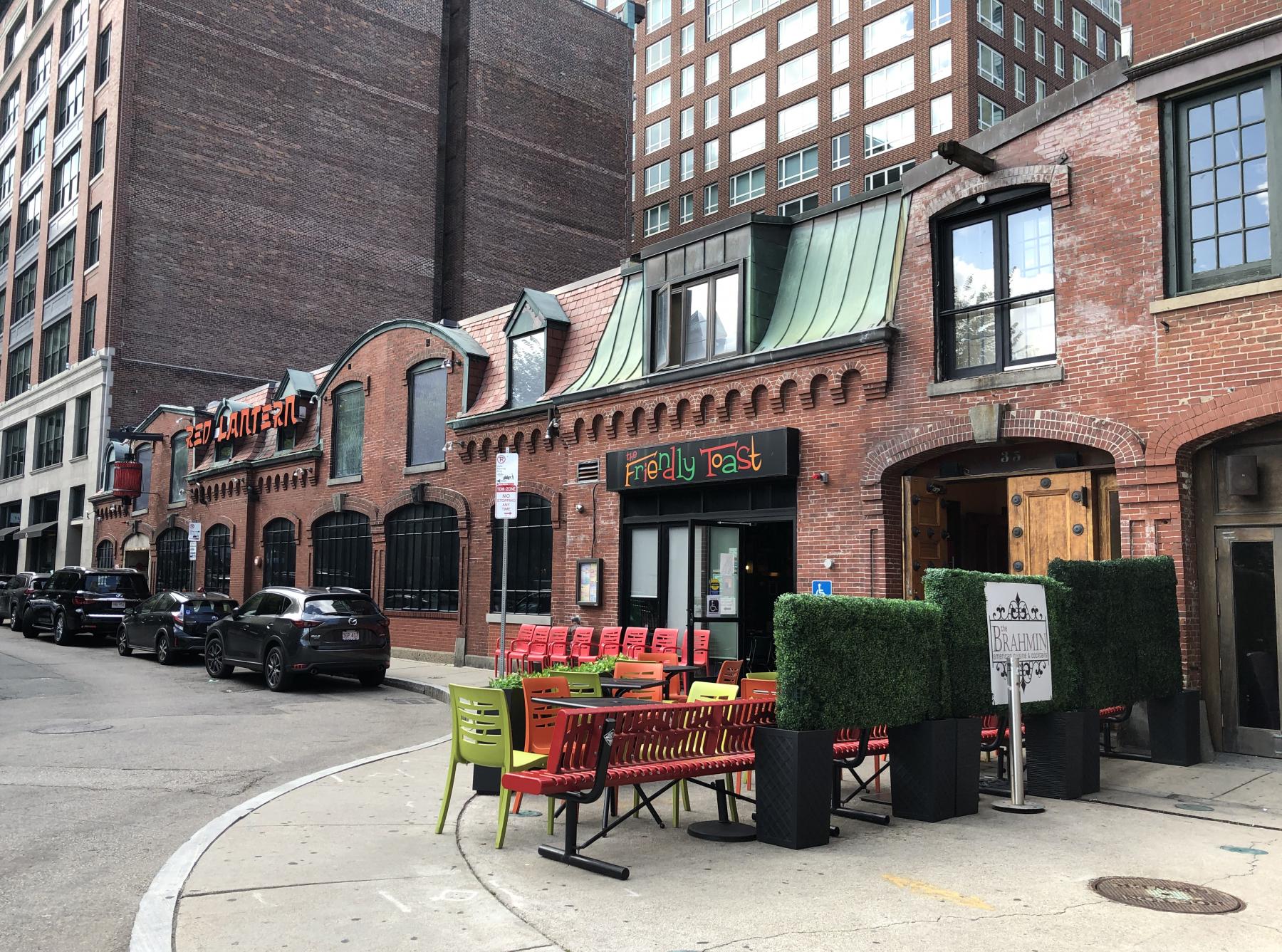 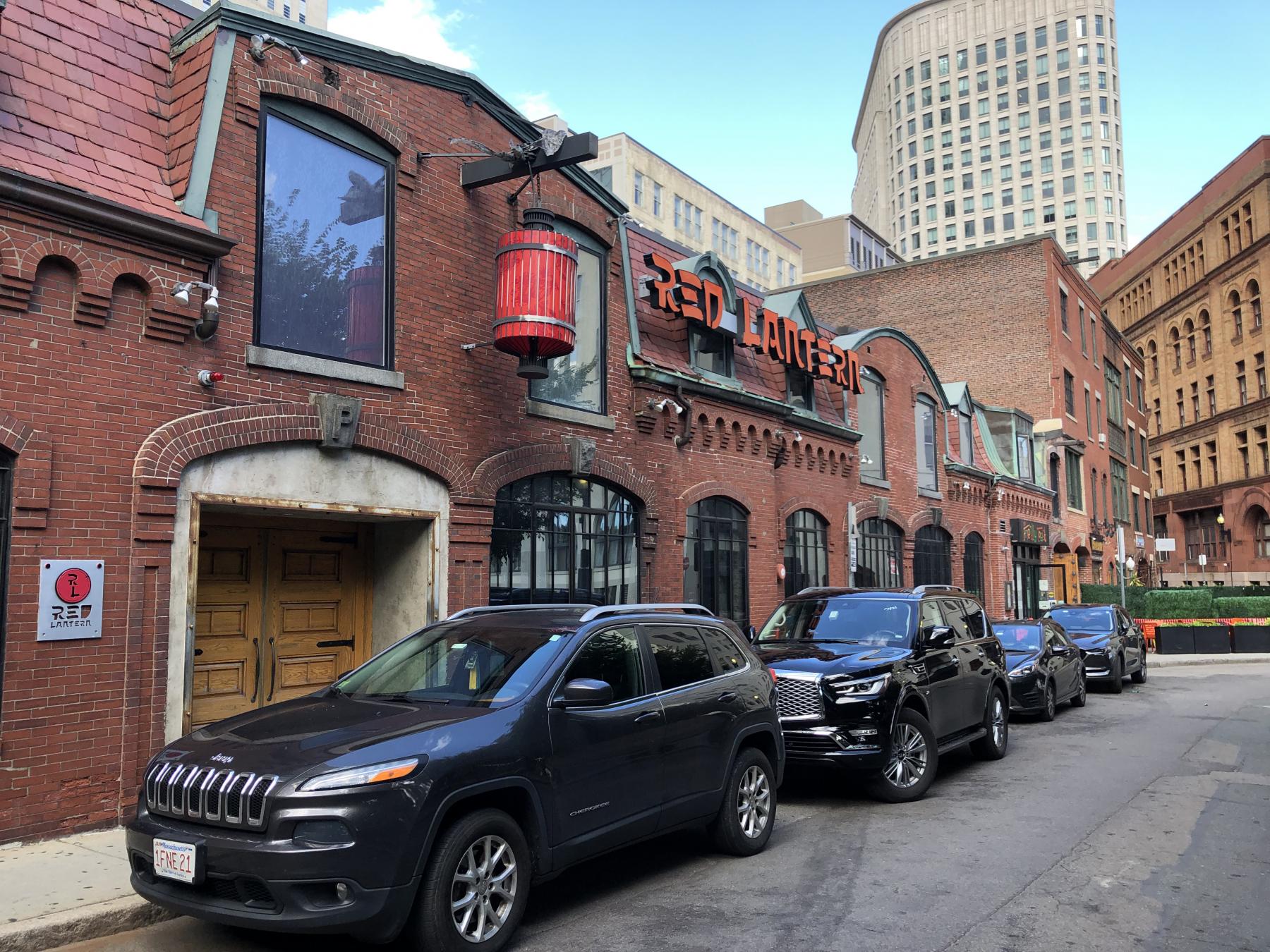 The Red Lantern at 39 Stanhope Street, photo via Matthew Dickey 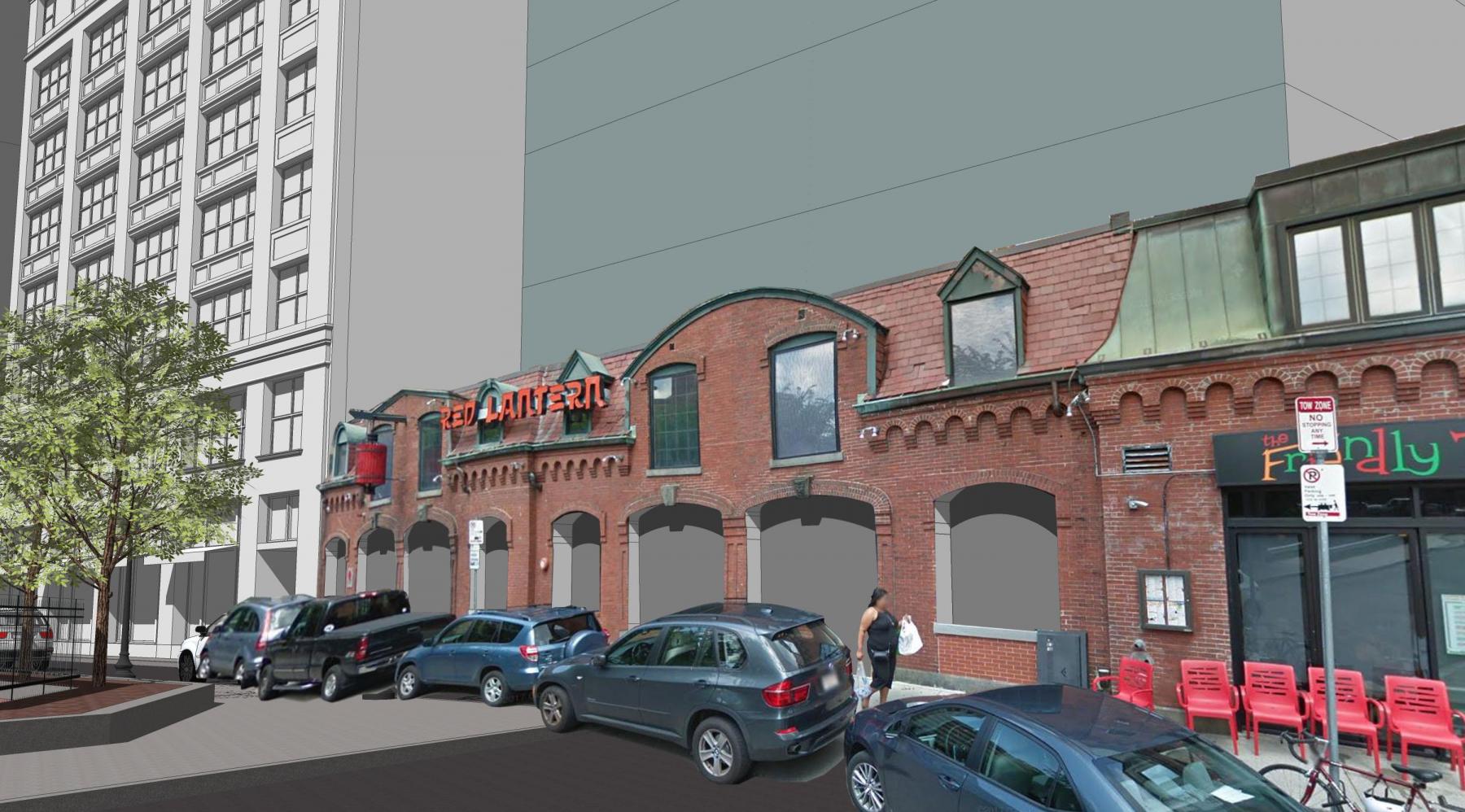 Option explored to set tower back from preserved facade; not selected; via proponent 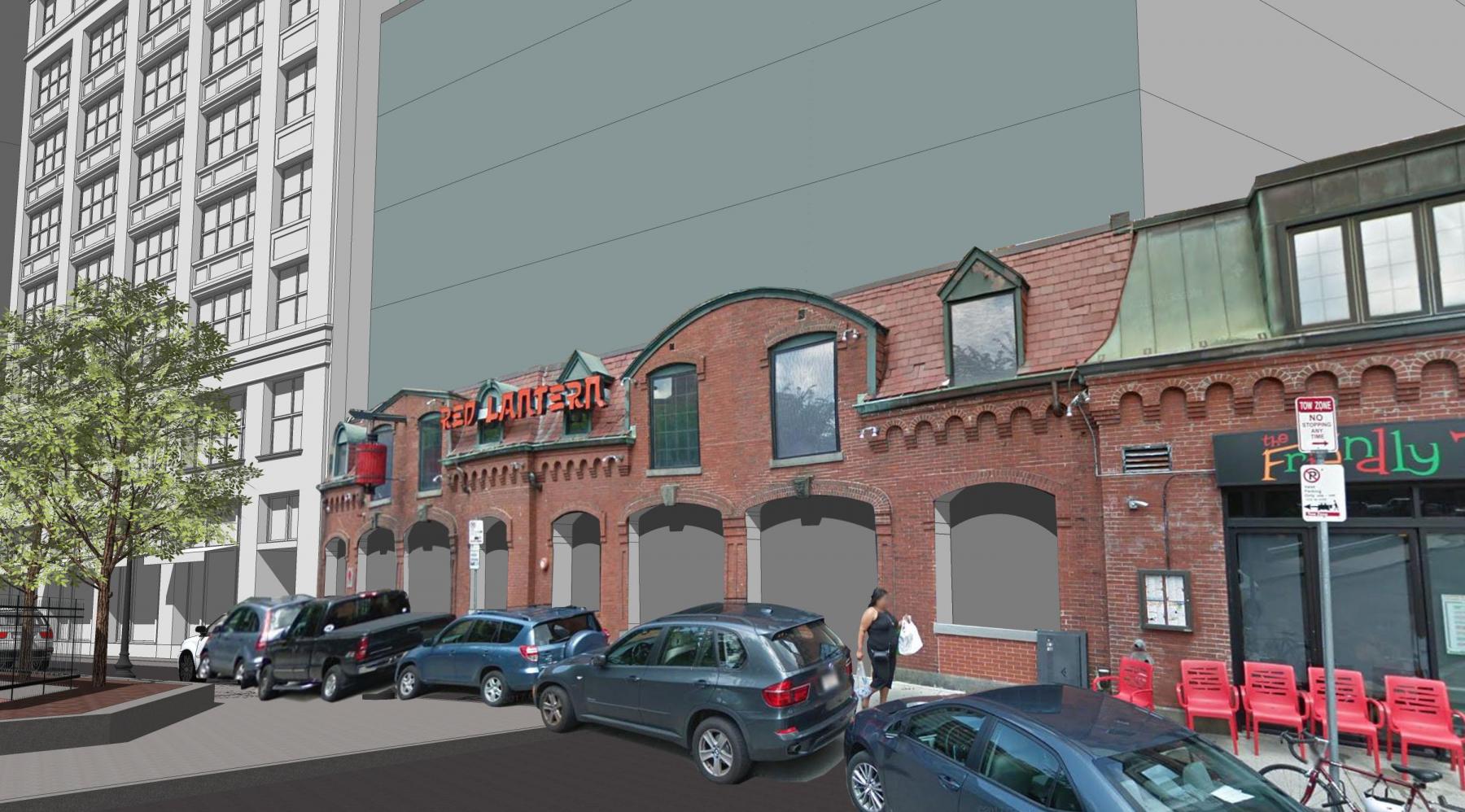 Option explored to apply tower to preserved facade; not selected; via proponent 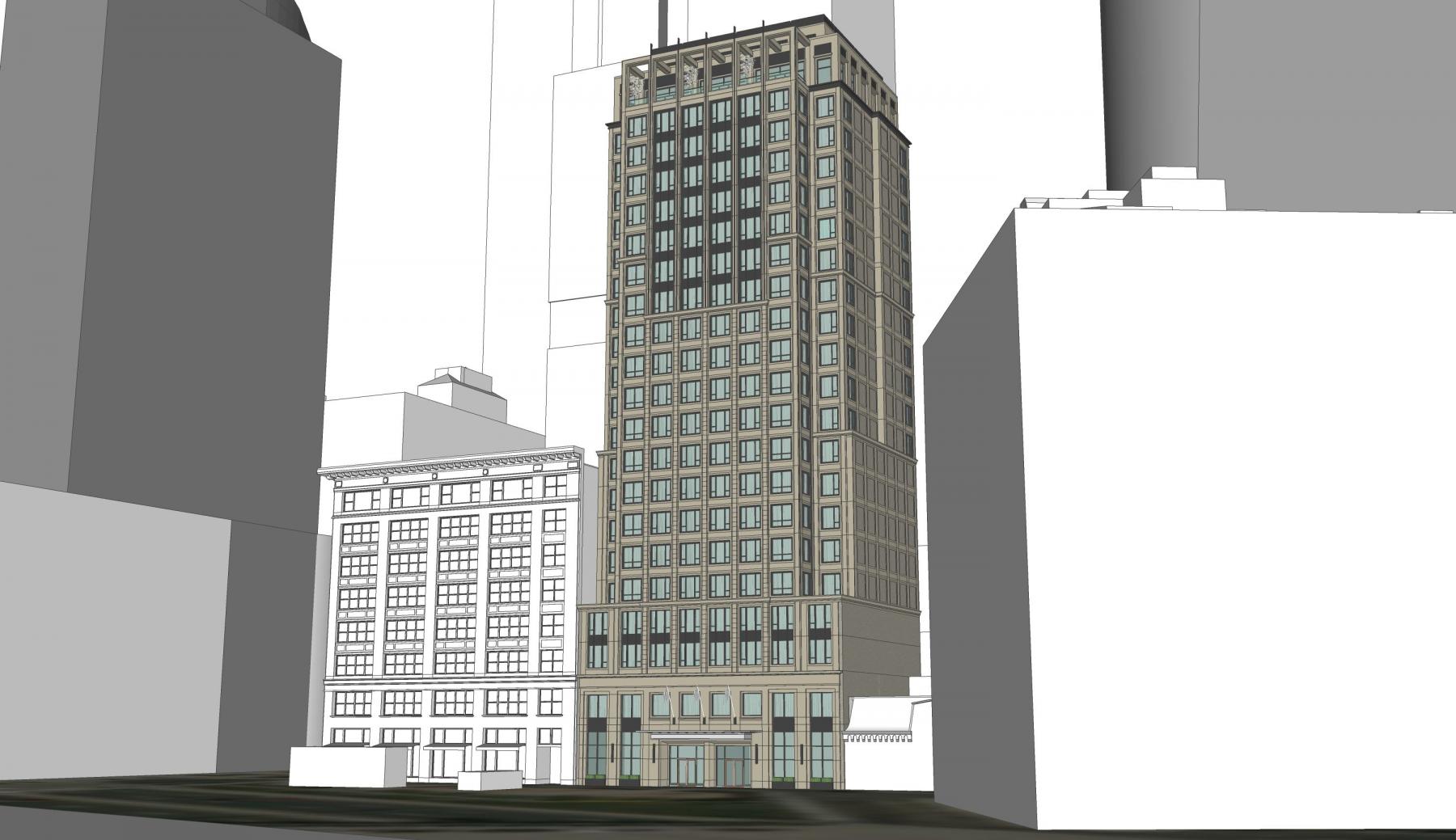 Conceptual rendering of proposed hotel, via HN Gorin and Group One 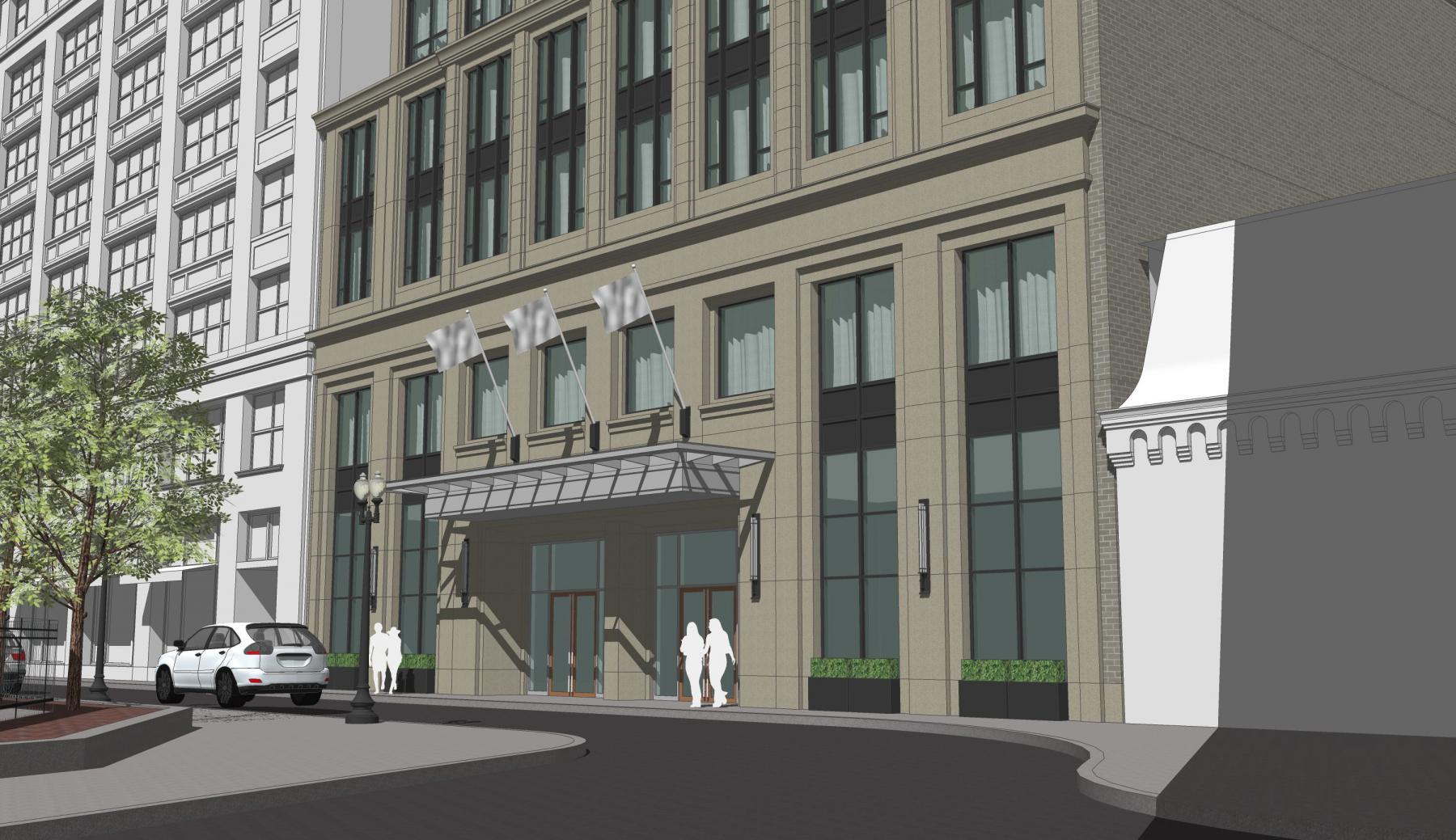 Conceptual rendering of hotel entrance, via HN Gorin and Group One 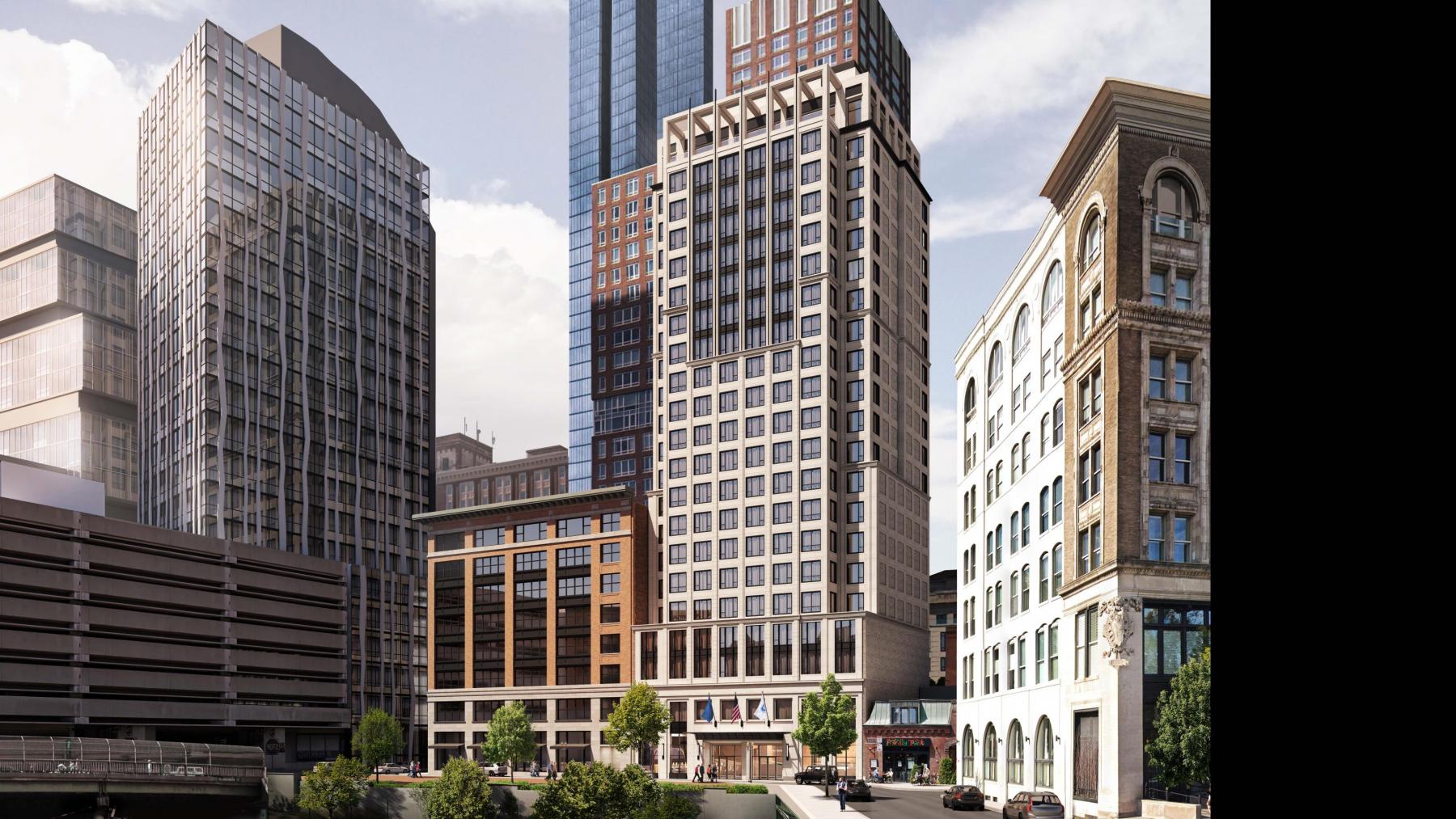 Proposal for new Club Quarters hotel, via HN Gorin and Group One 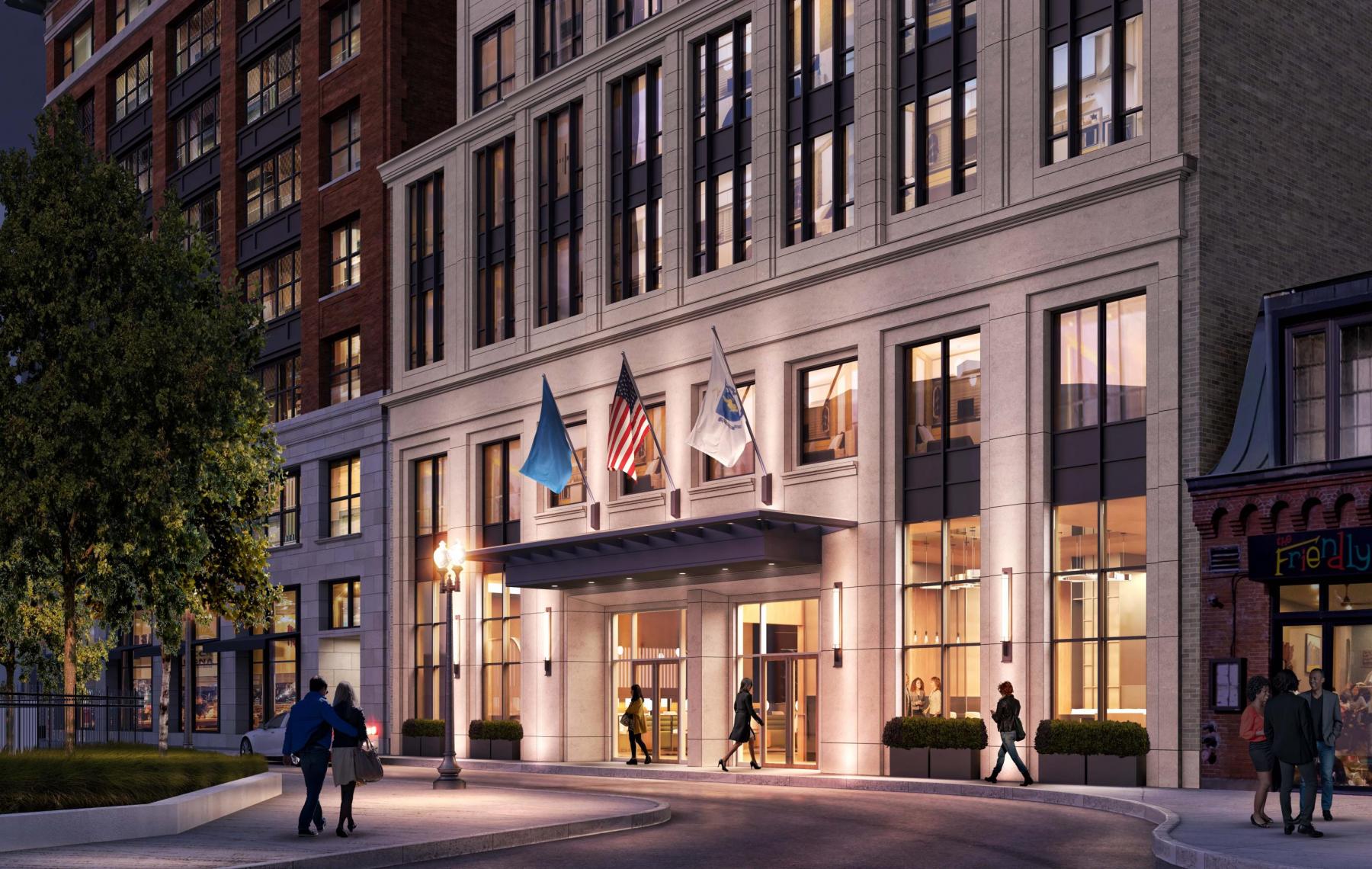 Proposal for new Club Quarters hotel, via HN Gorin and Group One
Thank you to all our corporate members, including: