After over 30 years of vacancy and deterioration, the historic Alexandra Hotel, which is within the South End Landmark District, is now part of a new project proposal. Evidence suggests that the 1875 Alexandra Hotel, also known as the Walworth Building, was designed by prominent architecture firm Peabody & Stearns. The proponent is striving to retain and restore the two most prominent facades of the original building (Washington Street and Massachusetts Avenue) and construct a 150-key hotel, approximately fourteen stories, on the lot behind and adjacent to the facades. The building beside the hotel was demolished several years ago leaving a vacant lot. The proposed development would infill that lot with an entrance to the hotel while a restaurant would occupy the ground floor of the Alexandra Hotel building.

The Alliance has been eager to see the Alexandra Hotel rehabilitated. We have concerns about the project setting a precedent for height, not only in a historic district but also glass towers attached to historic buildings throughout the city. We feel that the proponent has been thoughtful in their design process given challenging parameters and responsive to many concerns. The Alliance is able to support the proposal because it appears to be the only viable solution to save at least two facades of the historic hotel. It should be noted that our support is due to this unique set of circumstances which may not be the right solution at other sites.

Find project documents like the Project Notification Form and public presentations including BCDC at the BPDA website.

The Alliance submits a comment letter, attached below, to the BPDA in support of the revised project since the changes to the previously-approved plan are minimal.

Alliance staff meets with the developers of the site after hearing that the project has been reenergized. Though the project was approved in 2019 as a hotel, the COVID-19 pandemic has made hotel projects infeasible. The developers attempted to sell the approved hotel project but there were no offers. So they are now proposing to change the use to residential condos. As described to staff, the design of the project has not changed and the restoration of the historic facade remains a priority. From the exterior, the project remains the same; the change in use requires some interior floor plan modifications but a restaurant remains on the ground floor and a roof terrace (for use by the residents) remains in the plans. The BPDA is hosting a public meeting on September 7th.

The South End Landmark District Commission will hold a public meeting on site at the Alexandra Hotel. Anyone who wishes to participate should meet outside of 1767 Washington Street at the corner of Massachusetts Avenue at 5:00 pm on September 26, 2019.

The Alliance attends a subcommittee meeting of the South End Landmark District Commission where details of the project are discussed. Materials are mentioned and the team is encouraged to pay attention to details like textures and mullion depth. The team is encouraged not to use limestone on the new addition to differentiate materiality from the historic building. Elements such as lighting schemes and signage are also discussed. During the public comment period, Alliance Executive Director Greg Galer raises a question about the street level facade of the infill portion and encourages this section to have more dialogue with the Alexandra, and that the top of this section needs to be finished with an additional element, perhaps tracery. Additional subcommittee meetings will be held to discuss other details and the preservation component of the project. A site visit may be scheduled as well.

The Alliance attends the South End Landmark District Commission public meeting where the proposal is discussed. After reviewing details of the restoration plan and taking public comments, the commission briefly discusses the proposed new addition and unanimously votes to approve the project in concept (the height and massing of the new building and the restoration of the historic building) and to review further details at future subcommittee meetings, which will be open to the public. With this vote, the proponent may continue to move forward with the project as design details are determined in collaboration with commissioners and the community. Over a dozen members of the public speak, most expressing overwhelming support for the project and with a sense of urgency to move it forward. Commissioners emphasize that this project should not be considered precedent for other sites in the Landmark district, even as a mechanism to preserve other historic structures. Several in the room reiterate the shared goal of preserving the street presence of the Alexandra Hotel building and that many proposals with smaller scopes have not been successful in the past. Therefore, the consensus among Commissioners is to advance this proposal as the only viable option to save the historic Alexandra Hotel building.

The Zoning Board of Appeals approves the requested variances for the Alexandra Hotel proposal, a required step before moving on to a review by the South End Landmark District Commission.

The Alliance meets with the project team. The slideshow from the May 22 SELDC meeting is presented and confidential financial documents are shared. The Alliance asks the team to explain their analysis into other options for this site that could lead to a project with less impact such as condos, a smaller hotel project, and utilizing historic tax credits. The team explained how they had looked at all of these options, going back some time. For a number of reasons, including location, the constrained size of the site, the expense of restoring the long neglecting historic building, etc. the team outlined why their proposal for an approximately 150 room hotel is the only feasible option to save the historic facades. Given, in particular, the significant restoration cost of the poorly maintained facade, development cost is high. Purchase price is not a major driver of the financial challenge. As requested by SELDC, the team mapped other buildings within the South End Landmark District that are above the 70’ height limit and showed that these taller buildings are also at key intersections and gateways to the neighborhood. They feel this project will help better knit together the Roxbury and South End neighborhoods and provide amenities, such as a bar, restaurant, and public rooftop lounge, to residents.

The South End Landmark District Commission meets with the proponent for an advisory review of the proposed project. Though open to the public, the meeting is not widely advertised and the Alliance is not present. The meeting reportedly focuses on financial information relating to the proposal.

The BPDA board votes to approve the proposal. The proponent will also need approval for the necessary zoning variances from the Zoning Board of Appeal before beginning the review process at the South End Landmark District Commission. The commission has the option to approve, suggest revisions, or disapprove the proposal. If the commission disapproves, the project cannot move forward.

Alliance staff attends an advisory review meeting of the South End Landmark District Commission. Commissioners and members of the public express concerns about the proposed height of the tower and setting a precedent for the approval of projects that do not meet the standards and guidelines for the historic district, especially for height. Alliance staff suggests, and commissioners reiterate, that the while all want to save the building with a high quality restoration, the bar is high to allow new construction of this scale in violation of the District guidelines. Therefore the proponent should be required to demonstrate all other alternatives explored and why this is the only viable solution to save the Alexandra. Some other details are addressed, such as the western wall of the proposed new tower, but most design details are deferred pending further discussion on the allowability of a tower concept. The project will return for another advisory discussion before the applicant submits an application for formal consideration. The proponent is expected to continue to pursue approval from the BPDA and the Zoning Board of Appeals, as required before approval by the SELDC.

The Alliance submits a comment letter to the Boston Planning and Development Agency, attached below.

Alliance staff attends the design review subcommittee of the Boston Civic Design Commission. The latest iteration of the project is presented by CBT Architects. Responding to earlier comments, the design team has deepened the setback of the tower from the facade of the historic building, now 10’ on both the Washington Street and Mass Ave sides of the building. To offset this loss of interior space, an additional floor was added to the tower. Other changes have been made in an effort to ensure the historic building is prominent on the site and the new tower becomes a background building. There was a request to increase the setback at the top of the tower on the Washington Street side. The group discussed the most appropriate material for the reveal on the western side of the Alexandra; currently inferior party wall brick is exposed since the building was constructed to be abutting another building. The proponent will seek a variance to allow for more glass on the western side of the tower that faces Roxbury to avoid a blank wall, though it is important that the wall not compete with the Washington Street facade of the Alexandra. After discussion of small changes, the commissioners felt the project could proceed to the full commission for review. Nick Armata, staff at the Boston Landmarks Commission, was present to share concerns from the South End Landmark District Commission. That commission is not yet fully comfortable with the proposal.

An Alliance subcommittee meets with the proponent to discuss the project in detail. The Alliance was clear that the project must feel like a restored historic building with interesting new construction behind it, rather than a new, modern tower with an odd historic remnant. The historic Alexandra must remain prominent, although we recognize that the new construction is what facilitates preservation of a building seriously compromised by over 30 years of neglect. We therefore reiterated concerns already expressed by BCDC and SELDC that the tower should be pushed back further from the Washington Street facade of the Alexandra Hotel. The group also discussed options for the party wall that faces Northampton Street and other details. The Alliance will prepare a formal comment letter to submit to the BPDA.

Alliance staff attends a joint meeting with the Boston Civic Design Commission (BCDC) and the South End Landmark District Commission (SELDC). The latest iteration of the project is presented with changes based on previous feedback from both commissions. Some of the commissioners expressed concerns that the tower is too close to the facade of the Alexandra Hotel on the Washington Street side and should be set back several more feet, even if it means an additional floor or two on the tower. There was also a request to better articulate the party wall that faces Lower Roxbury so that the tower is engaging on all sides. The proponent will address these concerns and return to BCDC with a revised proposal.

Alliance staff speaks with staff at the Boston Landmarks Commission to understand the concerns of the South End Landmark District Commission.

Alliance staff attends a Boston Civic Design Commission meeting to hear the proponent present the project; comments that the Alliance is generally supportive of the concept but has concerns about precedent for height. 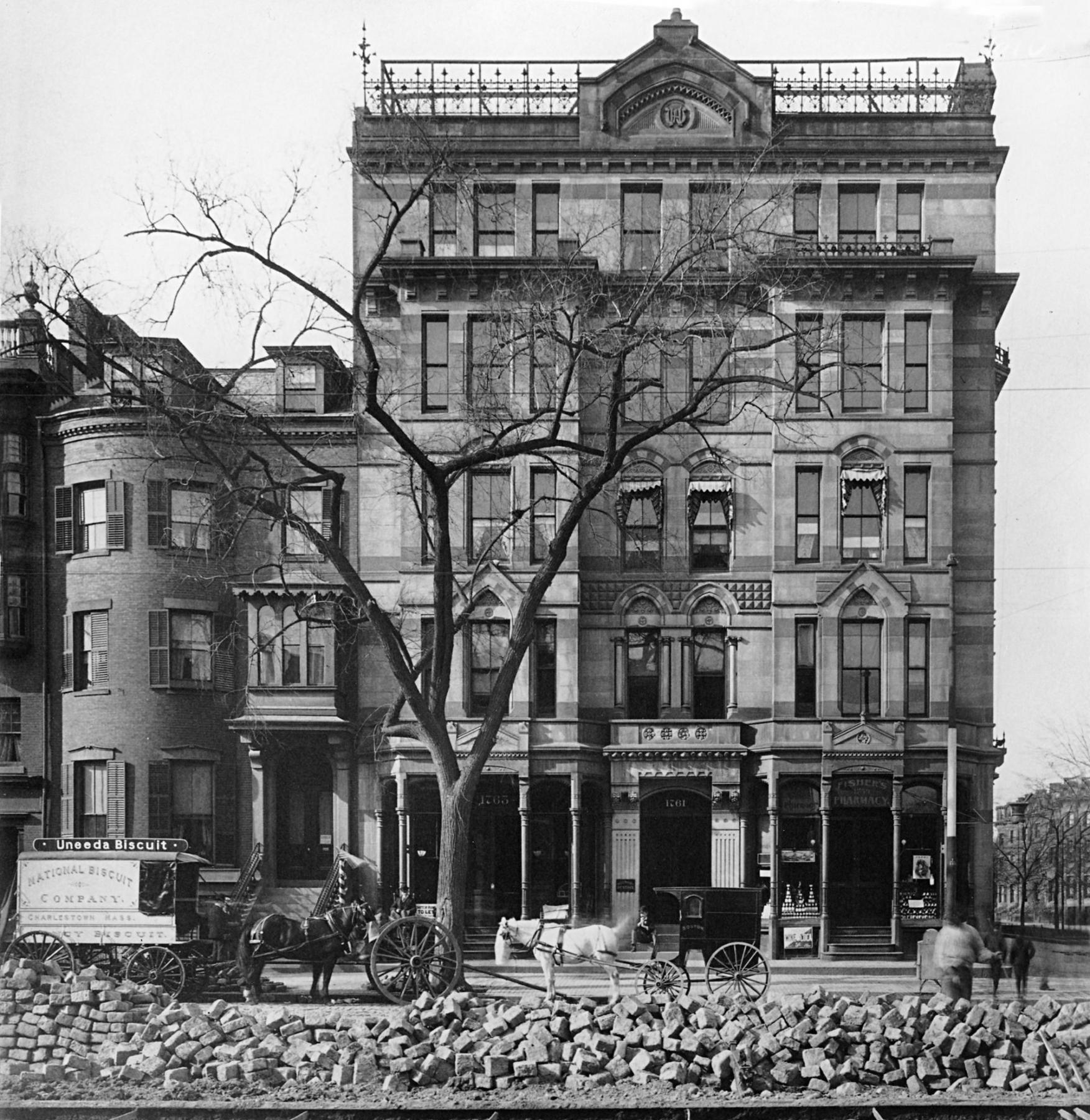 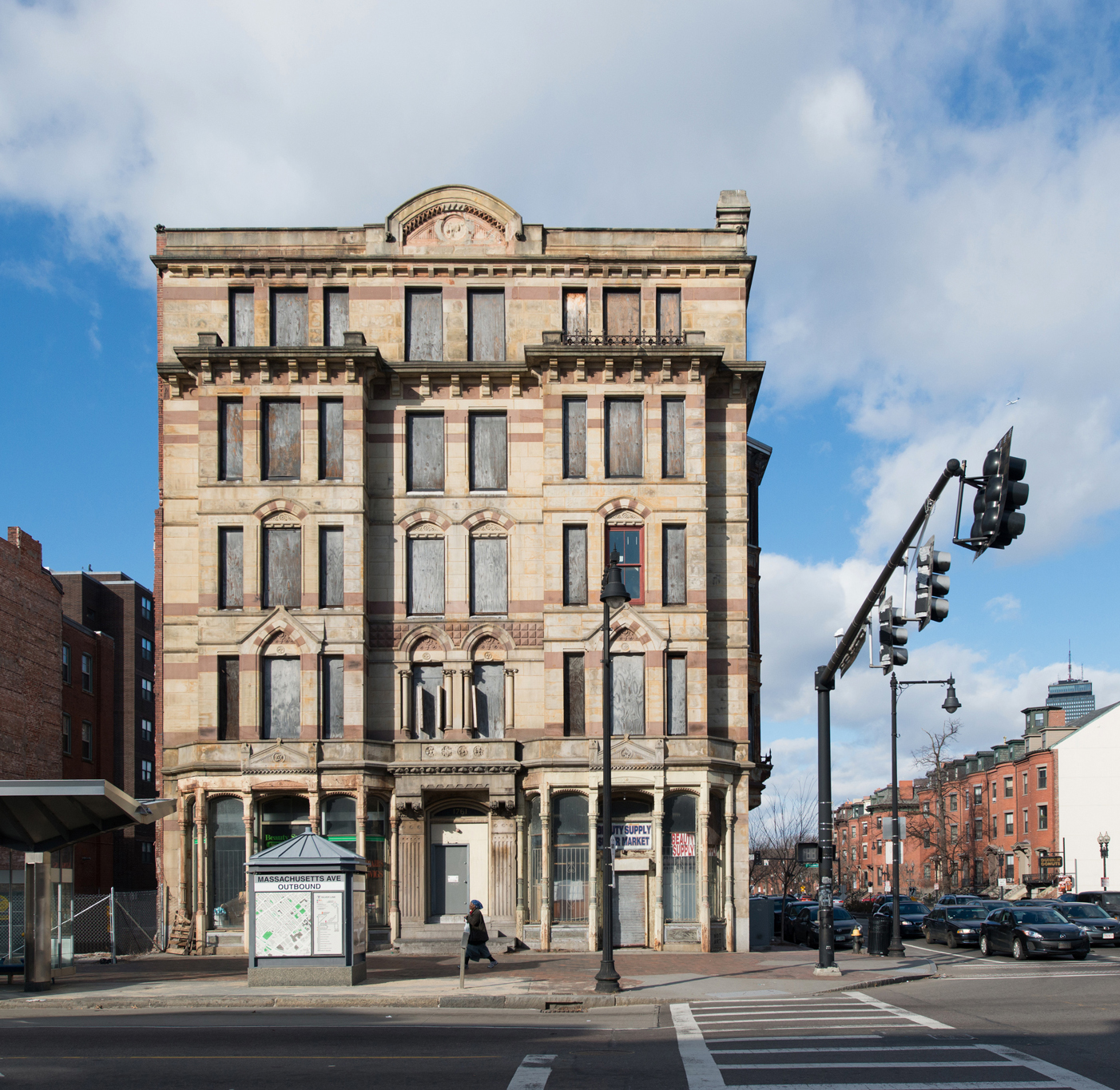 The vacant building is notable for its unique Gothic-style ornamentation and colorful sandstone facade. 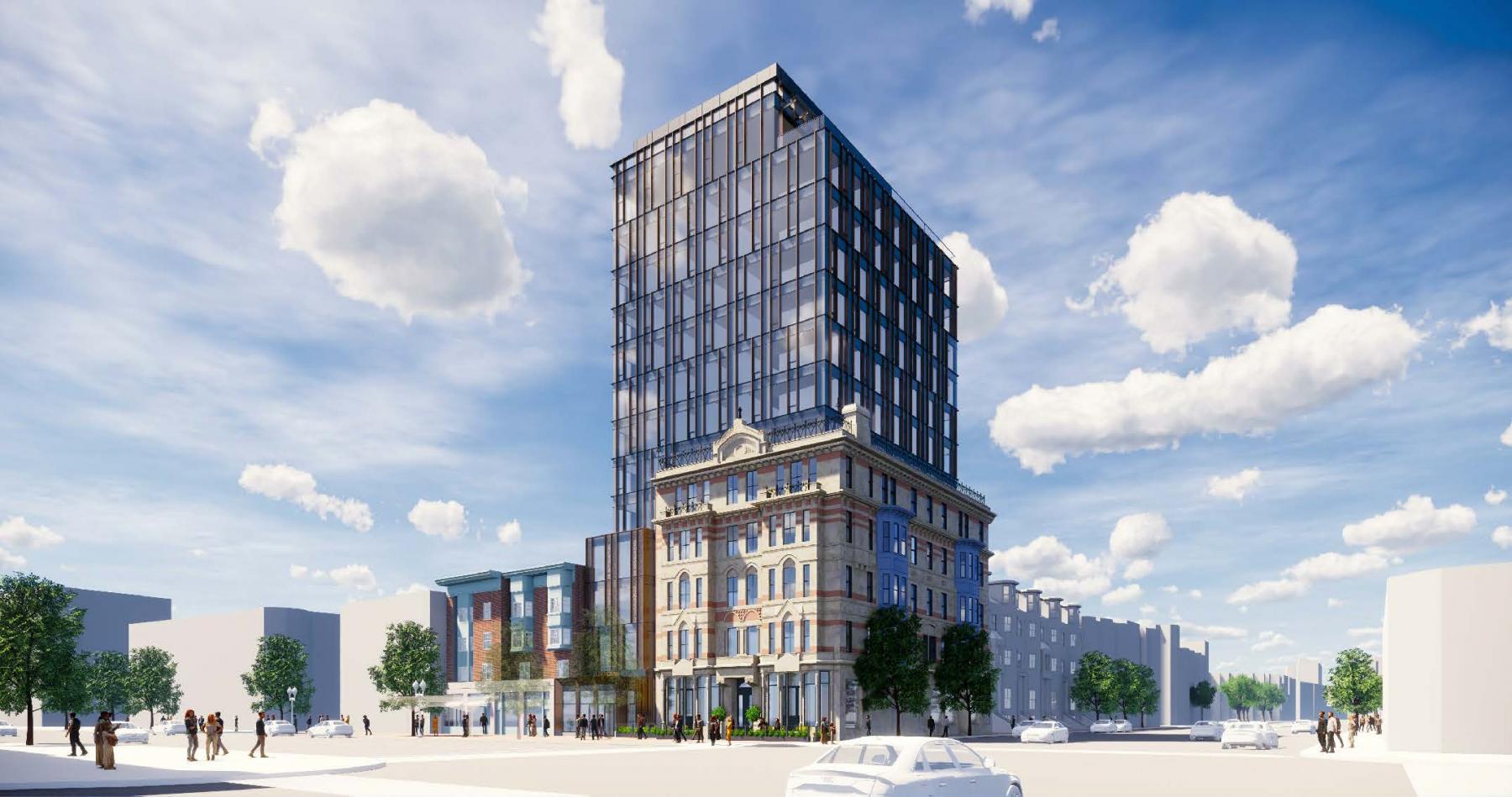 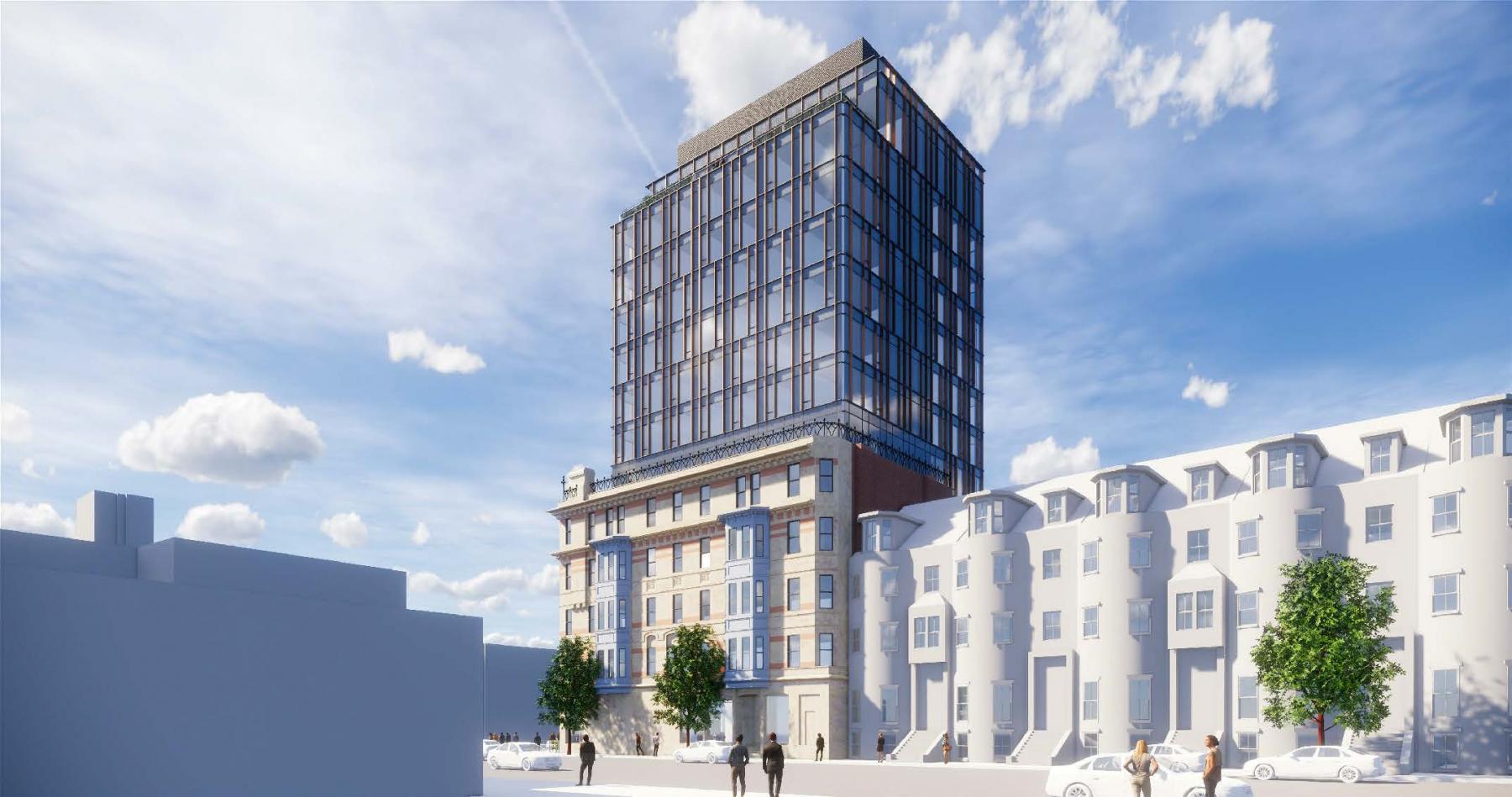 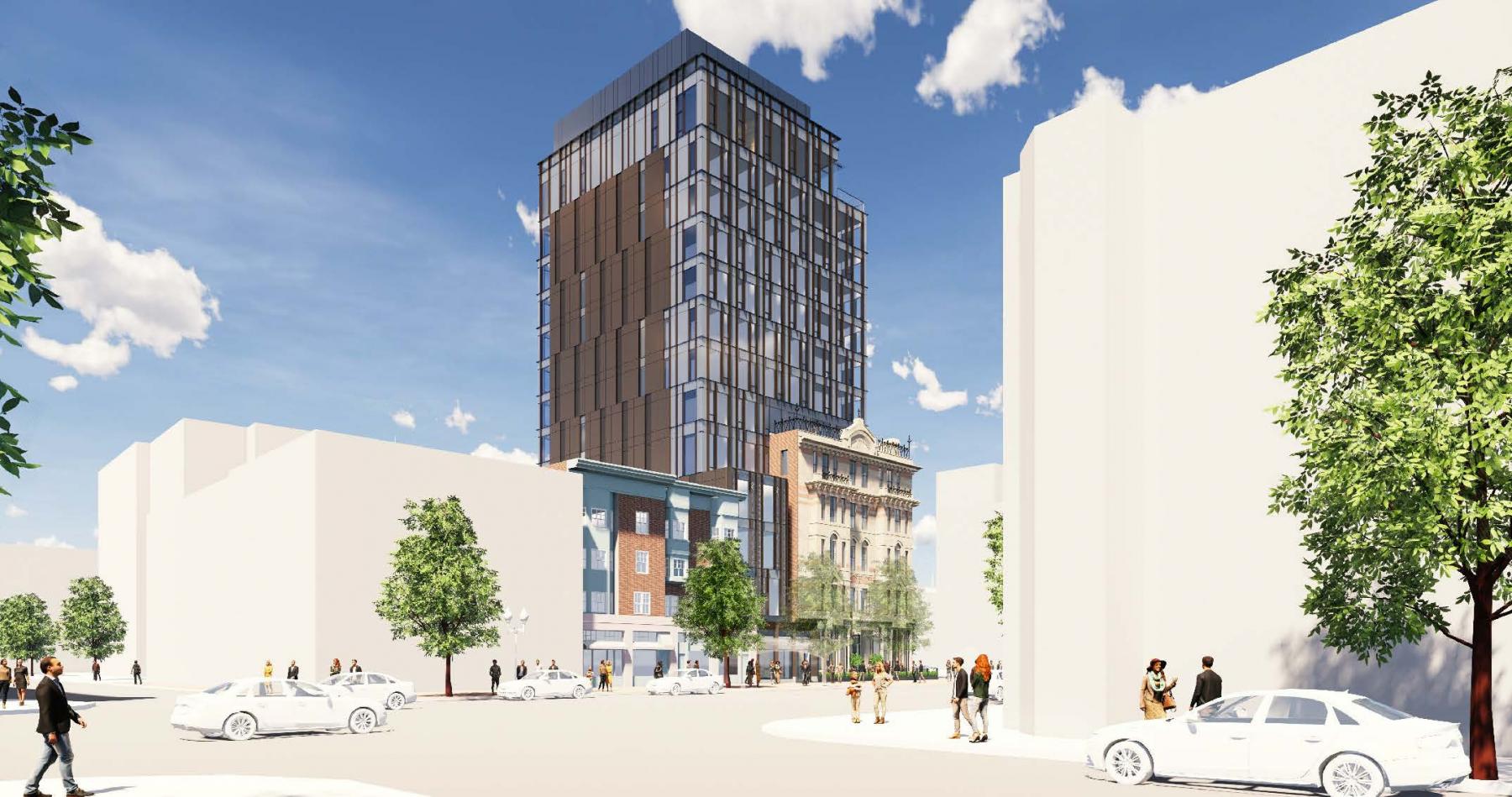 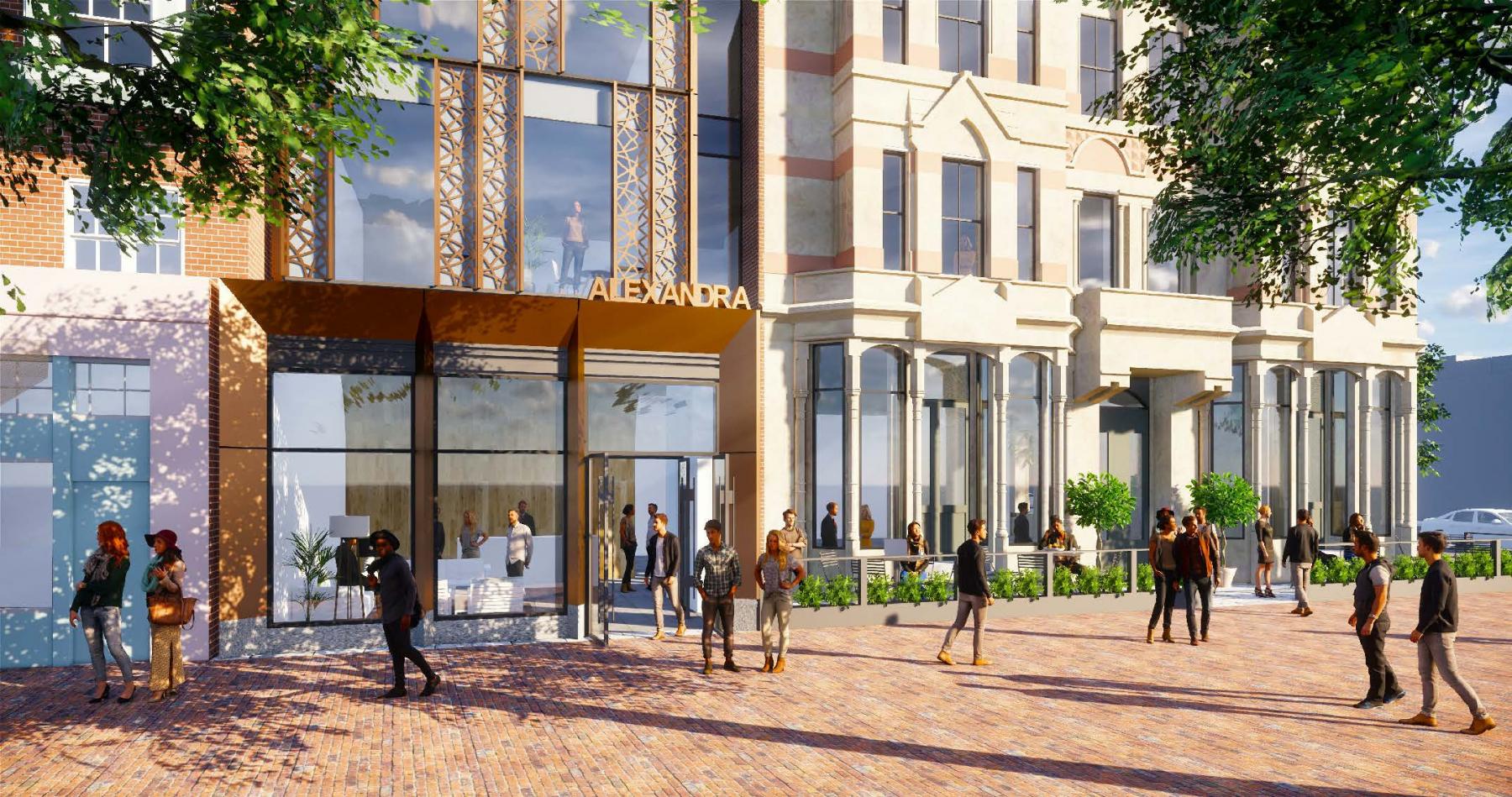 Rendering of Hotel/Restaurant Entries, via CBT, 8.12.19
Thank you to all our corporate members, including: