After a delay of more than a decade, The Druker Company is now moving forward with their proposal at 350 Boylston Street. The project has received the necessary City approvals years ago. A Notice of Project Change is now being reviewed because of the length of time that has passed.

Ten years ago, when this project was being reviewed by the City initially, the Boston Preservation Alliance strongly advocated for the preservation of the Shreves Building, also known as the Arlington Building, at the corner of Arlington and Boylston streets which will be demolished by this project. We felt it contributes to the character and historic integrity of the streetscape. At this highly visible and visited intersection, across from the historic Public Garden, Arlington Street Church, and the Back Bay Architectural District,  and therefore preservation of the existing historic fabric was the most appropriate response. The Alliance was vocal in efforts to designate the building a local Landmark, which would have provided protection from demolition, but the Boston Landmarks Commission rejected two applications for designation after determining that the building was not historically significant beyond the local level- a requirement for Landmark designation. An effort was also made to litigate the case in court, but the case was also not successful. When the Alliance became aware that this project would finally be moving forward, we made the decision that another effort to Landmark the building would be fruitless. However, members of our Board met with the project team to better understand the proposal as it stands today and we submitted the attached comment letter to the Boston Planning and Development Agency.

The Notice of Project Change is approved by the BPDA Board of Directors, clearing the path forward for the proposal.

The Alliance submits a comment letter to the BPDA, below, encouraging additional review of the proposal for two primary reasons. First, despite our recognition of previous quality work of the proponent and team, we feel that insufficient details about the proposed building have been provided to render a fair conclusion, especially since this site is within a prominent, historic neighborhood. Second, ten years is a long time and we believe the context of the neighborhood and community expectations for development have changed sufficiently over the last decade to deserve an updated review at BCDC.

Members of the Alliance’s board meet with the project team to review the updated proposal.

The Alliance attends the BPDA’s public meeting where the project is presented. Many members of the public speak in support of the project; others ask questions and some express concerns and opposition.

Alliance staff meets with the Druker team to discuss updates to the project and agrees to schedule an opportunity for The Druker Company to present to some members of the Alliance board.

A letter is submitted to the Boston Landmark Commission on behalf of several supporters and the Alliance urging reconsideration of the Landmark Petition for the Shreves Building and providing additional information about the historic significance of the architecture and architect. The letter references factual errors and omissions in the original petition and suggests that the facade should be retained in any new development. Letters are included from supporters from around the world, many experts in Art Deco design.

The Alliance submits a letter to the BRA noting, in part: “The Alliance’s current position is that it would only support a redevelopment at this location if the new building was a landmark quality equal to or exceeding that of the existing Arlington Building. While those present at the meeting with Kairos [Shen, Chief City Planner] agreed that the re-design is moving in a positive direction, we are also in agreement with Kairos that the proposed redevelopment of 350 Boylston does not yet meet the standard required at this very important corner of the Back Bay.”

The Druker Company presents their proposal for a new building at the site to the Alliance and the Alliance submits a comment letter dated April 29, 2008. That letter is below.

The Boston Civic Design Commission reviews the proposal and provides feedback about the design. Commissioners ask for a stronger architectural statement at the corner.

A Project Notification Form is filed with the Boston Redevelopment Authority by The Druker Company. The proposal calls for demolition of four buildings, including the Shreve’s building, and clearing of the site to make way for a mixed-use development of aproximately 221,230 square feet. At 120’, the building is proposed to house ground floor retail and restaurant space and eight floors of first class office space. Parking will be below grade. The document references BLC’s declination in 2006 of the petition to Landmark the building as justification for its demolition and claims facade preservation is cost prohibitive and not considered acceptable means of preservation.

The Boston Landmarks Commission votes not to accept the petition for designation of the Shreves Buildings as a local Landmark. The Commission states that while the building has a high level of local significance, the historical information presented at the hearing does not meet the level of significance required, which is beyond the local level. The Commission notes that they would reconsider the application should new information be discovered that elevates the significance beyond the local level.

The Alliance submits a letter to the Boston Landmarks Commission requesting review and upgrade of the rating status for buildings on the south side of Boylston Street between Arlington and Berkeley streets. At their July 13, 2006 meeting, Commissioners voted to upgrade the ratings for most of the buildings, excluding only 380 Boylston Street. 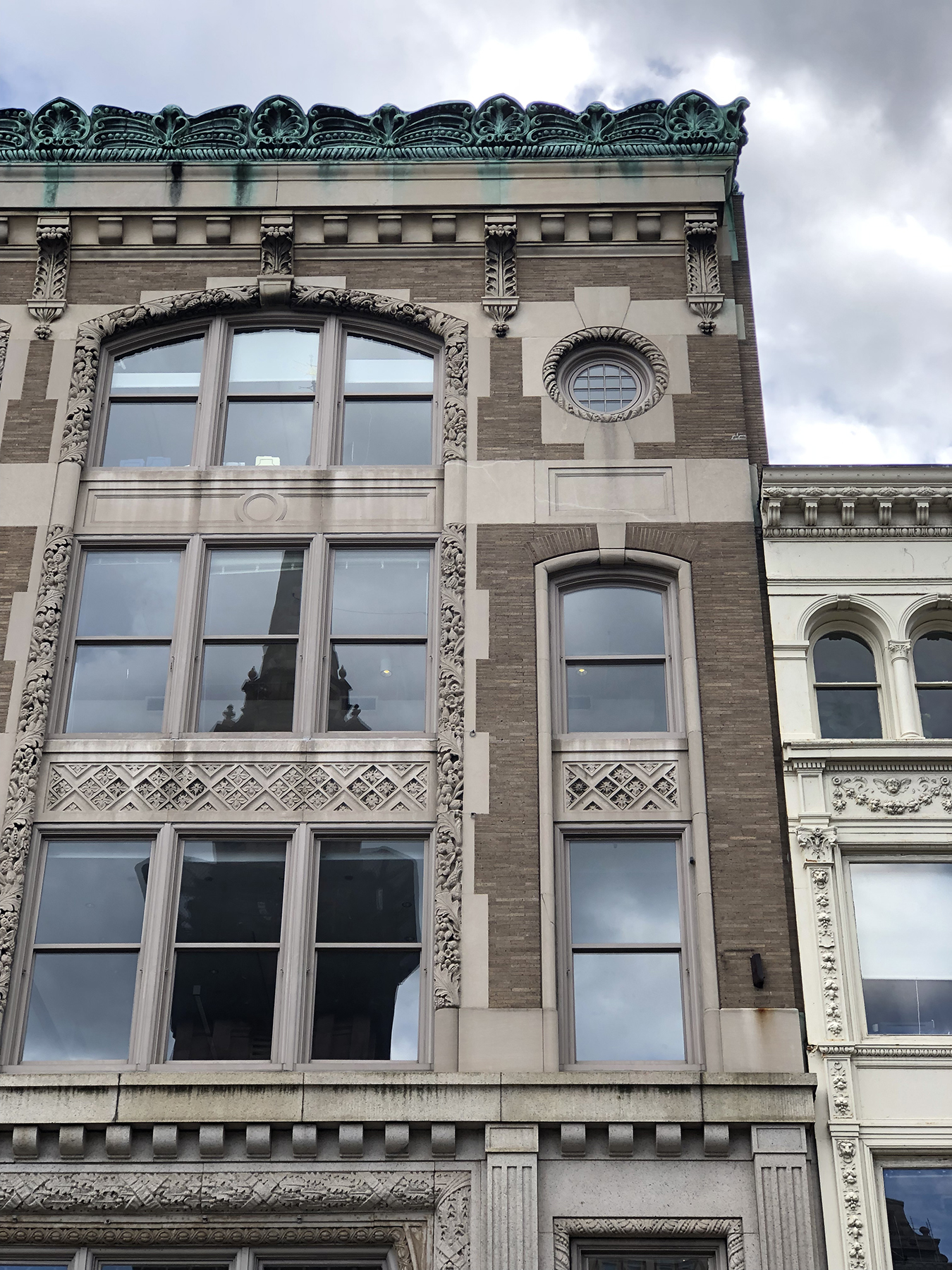 Detail of the Arlington Building, 9.25.19, photo via Matthew Dickey 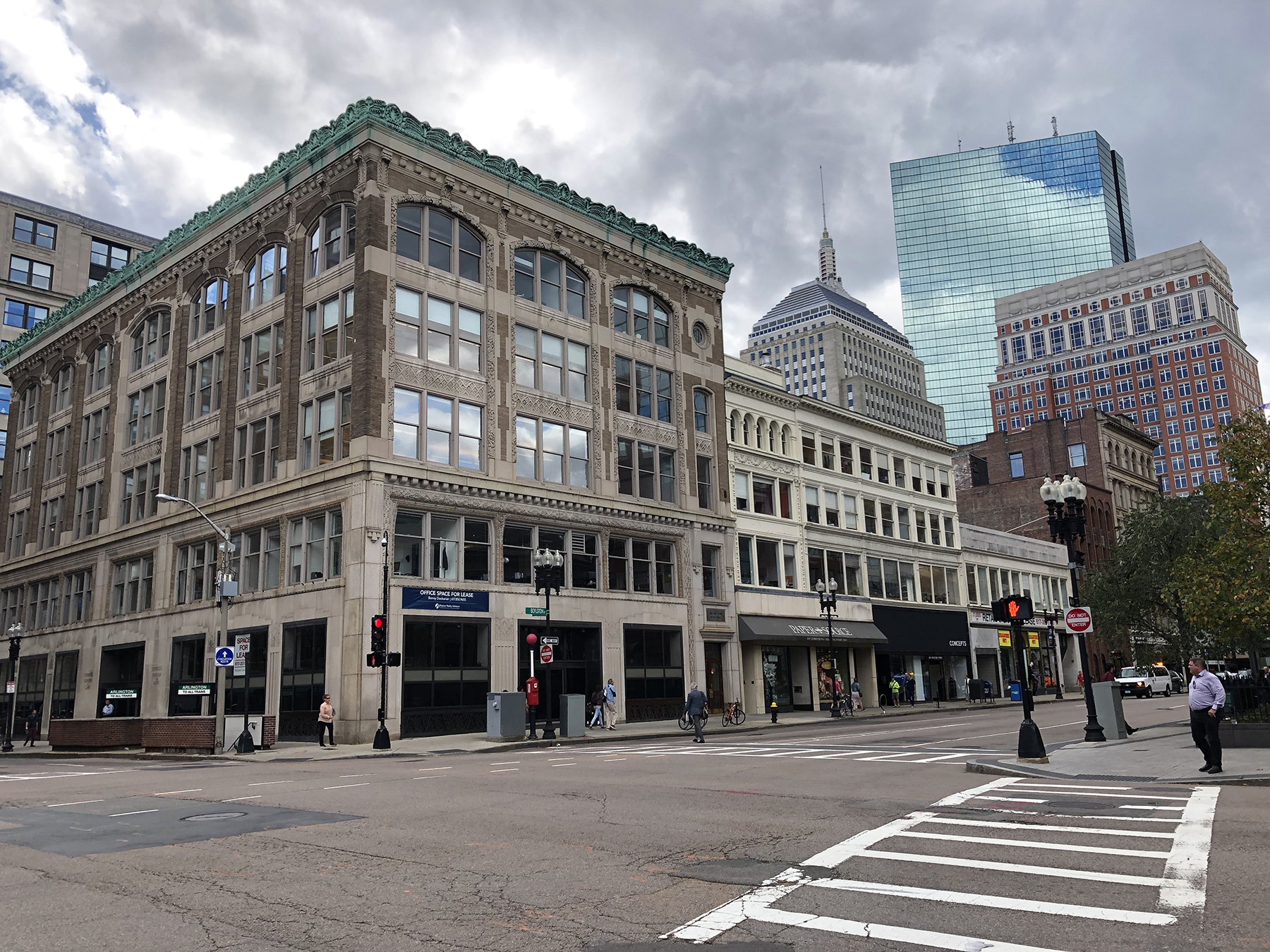 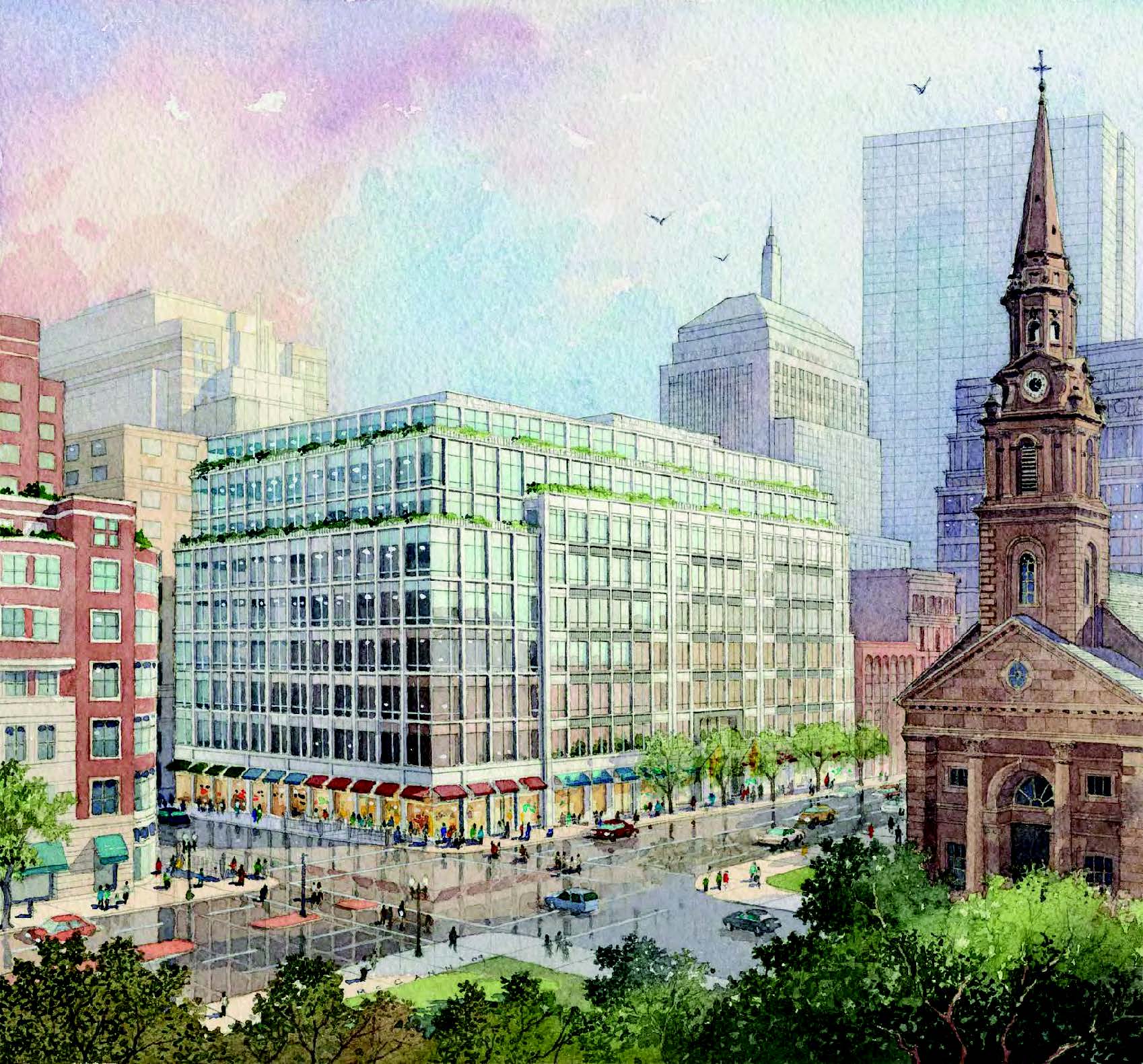 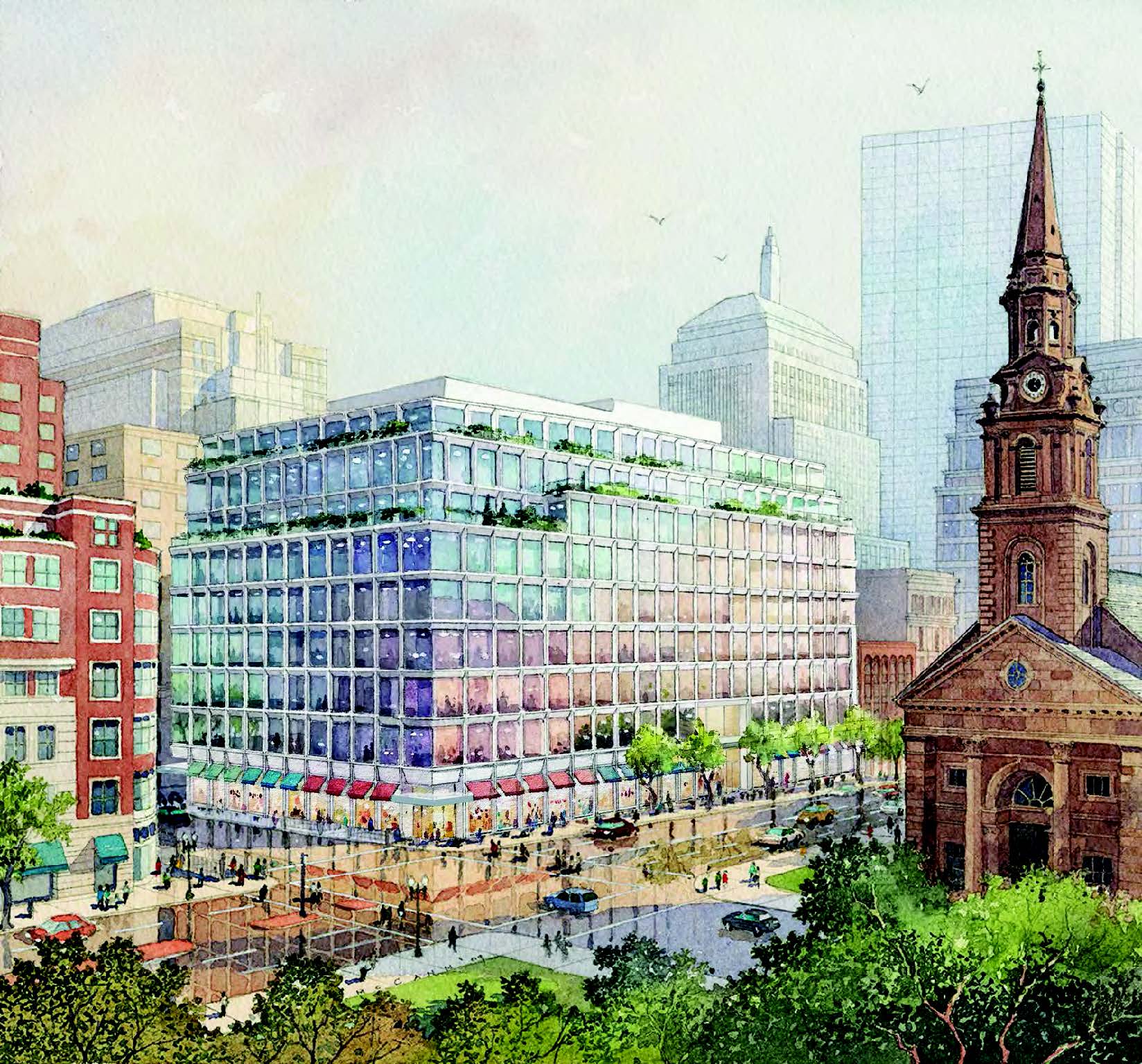 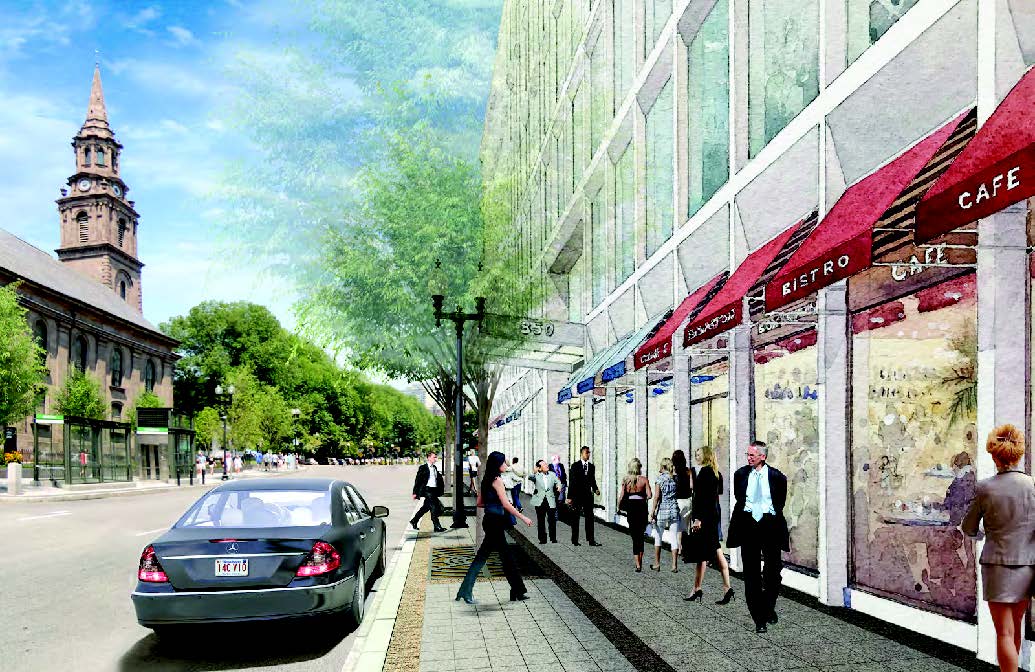 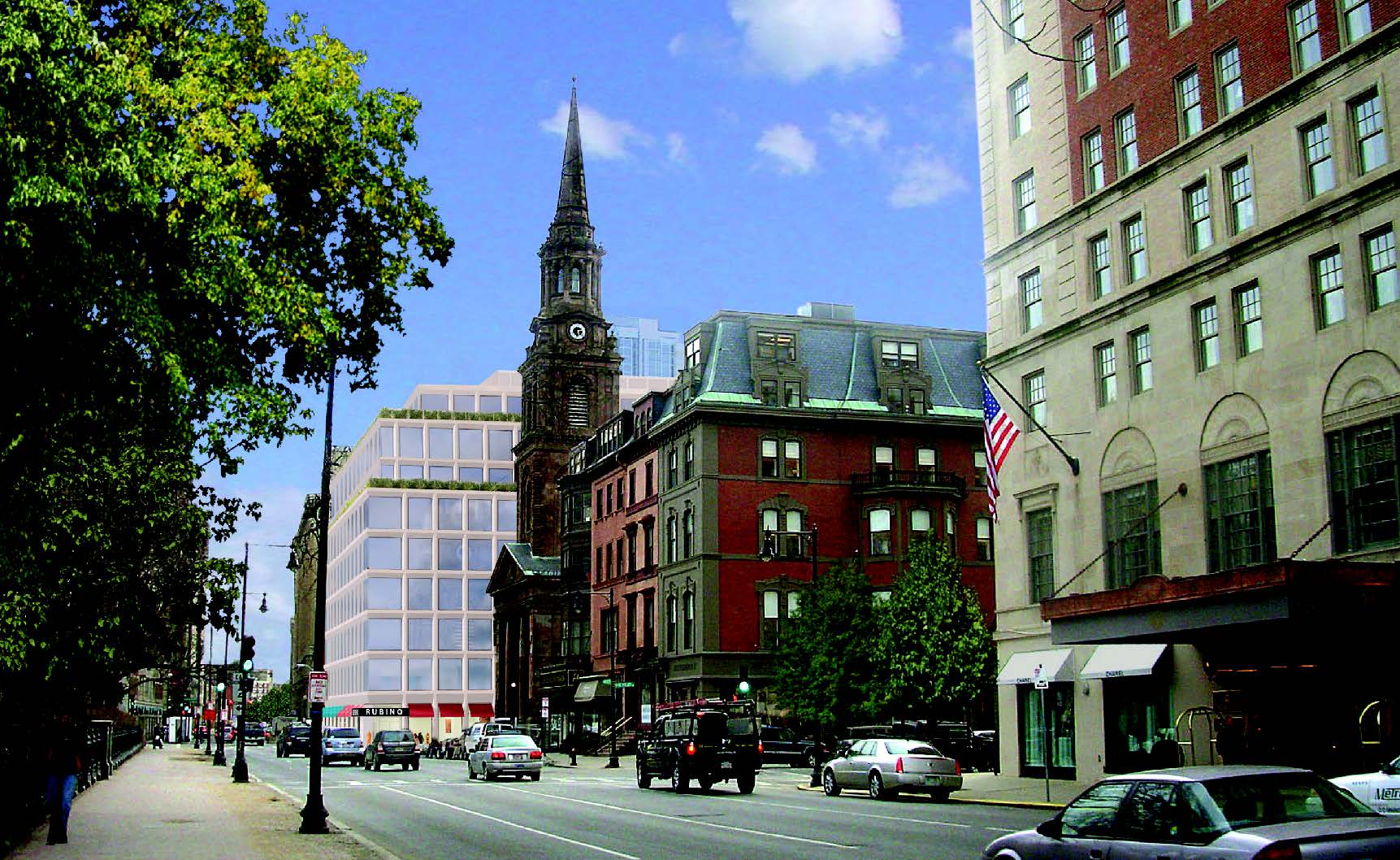 2019 proposed design, Arlington Street view
Thank you to all our corporate members, including: