Built in 1912, Fenway Park is the oldest active Major League baseball park in the United States and one of only two remaining ballparks built during baseball’s “Golden Age.” Although generations of baseball stars such as Babe Ruth and Ted Williams have played in this stadium, Fenway Park largely has remained unchanged over the past century. The most noticeable and iconic change was the 1934 addition of a 37-foot wall with a 23-1/2-foot tall screen on top it in left field. With a coat of green paint in 1947, this wall transformed into the “Green Monstah” that greets Red Sox fans and tourists alike at Fenway Park.

Fenway Park’s architectural, historical, and cultural significance earned it a place on the National Register of Historic Places and consequently historic tax credit in 2012. It is currently pending Boston Local Landmark status. In addition to advocating for these two designations, the Boston Preservation Alliance nominated Fenway Park for the 2008 Sports Business Awards’ Sports Venue of the Year and awarded the ballpark a Special Commendation for Outstanding Stewardship at the 2005 Preservation Awards. In 2017 the Alliance awarded the Boston Red Sox the President’s Award for Excellence for their dedication to the preservation of Fenway Park.

Despite these recent accolades, Fenway Park faced demolition in the late-1990s and early-2000s. The owners of the Red Sox at that time proposed building a new stadium with more seats, luxury boxes, and amenities. In 1998, representatives of the Boston Preservation Alliance joined neighborhood advocates and helped form Save Fenway Park! (SFP!). As stated in its mission statement, this coalition of individuals and organizations wanted “to preserve the unique character of Fenway Park while allowing its modernization and expansion to meet contemporary needs.” Thus SFP! and the Alliance called for the renovation of the existing park rather than the construction of a new Fenway Park. Through surveys, rallies, canvassing, and campaigns, SFP! successfully gained public support, earned a National Trust Preservation Grant, and had the ballpark included on Historic Massachusetts’ Ten Most Endangered Historic Resources list. The Red Sox announced that they would make the historic Fenway Park their permanent home in 2005 after SFP! and the Alliance proved that a renovated ballpark could provide additional seating and space at a lower cost than a new facility.

Today Fenway Park remains one of Boston’s most popular tourist attractions and home to Boston’s favorite team within the structure that The New Yorker writer Roger Angell called “the best place in the world to watch baseball.”

•    August 15, 2019
The board of the Boston Planning and Development Agency approves the theater and overlook project.

•    July 19, 2019
The Alliance submits a comment letter supporting the theater and overlook projects and suggests a financial contribution to the independent Legacy Fund for Boston, which supports historic preservation efforts throughout the city. The letter can be found in the attachments to this page.

•    June 25, 2019
Alliance staff attends a Boston Landmarks Commission meeting where the revised bleacher project is presented and discussed to the Design Review committee and then voted on by the full commission. Instead of removing six rows of bleachers as had been proposed previously, the proponent is now removing only three rows of seats to accommodate counter seating and dedicated standing positions with new concession and restroom spaces behind. Above this seating area will be a new overlook structure with a multi-purpose reception/function room for group events before or after Fenway Park events or for private functions on non-event days. Commissioners and members of the public express appreciation for these positive changes. Alliance Executive Director, Greg Galer, speaks in favor of the project, noting the proponent’s redesign of the adjoining theater project to preserve more of the historic fabric on the site. There is some concern from members of the public that the bleacher project alters the interior character of the park too much. Commissioners ultimately recommend approval to the full commission and the bleacher overlook portion of the project is unanimously approved. Note that the Landmarks Commission does not have purview over the theater portion of the project which is outside of Fenway Park, a pending local Landmark.

•    May 28, 2019
Alliance staff attends a Boston Landmarks Commission design review meeting. The elements inside of the ballpark are discussed- the removal of six rows of bleacher seats and the addition of an amenity space and accessibility connections. The Commissioners present for the meeting note that they are not significantly concerned about the proposed changes to the park, but are hesitant to support the loss of fabric if it means also losing regulatory purview of the addition since the new structure is technically outside the boundary of the pending Landmark designation. Alliance staff mentions previous dialogue with the project team and some concern about loss of viewshed to the city skyline with the new structure, though overall in support of the full scope of the project.

•    May 21, 2019
Alliance staff attends a BCDC design review committee meeting. Changes to the exterior of the site are presented. The design now retains six of the seven bays of the historic garage, removing only one and reconstructing the end cap bay to recreate the symmetry of the existing garage. A strong architectural line runs across the facade from the new marguee at the point of the theater to the far end of the garage, uniting the old and the new architecture into one cohesive expression. The materials in the new addition and the rhythm of the fenestration complement the historic building but the gray metal proposed for the upper portion of the theater distinguishes the new use from the historic ballpark. The committee discusses the metal portion and suggests a slight alteration to highlight the parapet of the end cap on the garage. They also review landscaping details. Changes to the interior of the ballpark are not discussed by the committee because they are not considered elements of the public realm, but are anticipated for discussion with the Boston Landmarks Commission. The committee recommends adding the project to the agenda for the June BCDC meeting for discussion and a potential vote to approve.

•    May 7, 2019
Alliance staff joins the project team for a meeting to discuss updates to the project, specifically proposed changes to the interior of the ballpark and viewsheds from within the park. The addition of a terraced seating area and covered concession space requires the removal of six rows of bleacher seats. The project team is still considering potential changes to the parking garage and theater portions of the project.

•    April 16, 2019
Alliance staff attends a BCDC design review committee meeting where the Fenway Theatre proposal is discussed. There is a discussion about materials and how to distinguish the new construction from the existing architecture and expression of the ballpark without the addition feeling foreign, including the addition of new signage. Urban realm elements such as street trees, benches, and bollards are also discussed. Alliance Executive Director Greg Galer cautions against overwhelming the historic charm of the park with the introduction of too many new elements.

•    March 25, 2019
The Alliance submits a comment letter, below, regarding the Fenway Theater proposal asking for more views of the new construction and preservation of the Fenway Garage facade.

•    March 19, 2019
Alliance staff attends a meeting of the Boston Civic Design Commission (BCDC) where the Fenway Theater proposal is presented and discussed. Commissioners express hesitation about the partial demolition of the Fenway Garage and the introduction of street trees beside the building. The proponent is asked to provide views from inside the park. Alliance staff reiterates points made by Commissioners and emphasizes significance of context within the larger neighborhood.

•    February 22, 2019
The Boston Red Sox file a Project Notification Form (PNF) with the Boston Planning and Development Agency (BPDA) outlining a proposal (Fenway Theater) to construct a performing arts center adjacent to Fenway Park. The project includes renovations to the park itself, including removal of six rows of bleacher seats and the addition of an events space, and the partial demolition of the c. 1913 Fenway Garage which was designed by the same architect as the park and built one year after.

•    September 19, 2017
The Alliance holds it annual Preservation Achievement Awards at Fenway Park and honors the Boston Red Sox with the President’s Award for Excellence in recognition of the organization’s commitment to the preservation of the historic park. 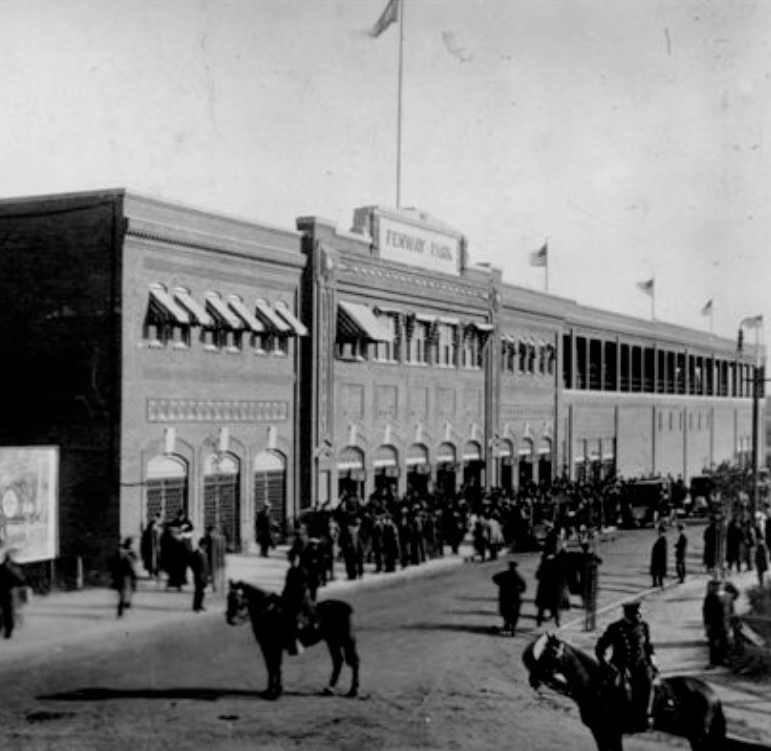 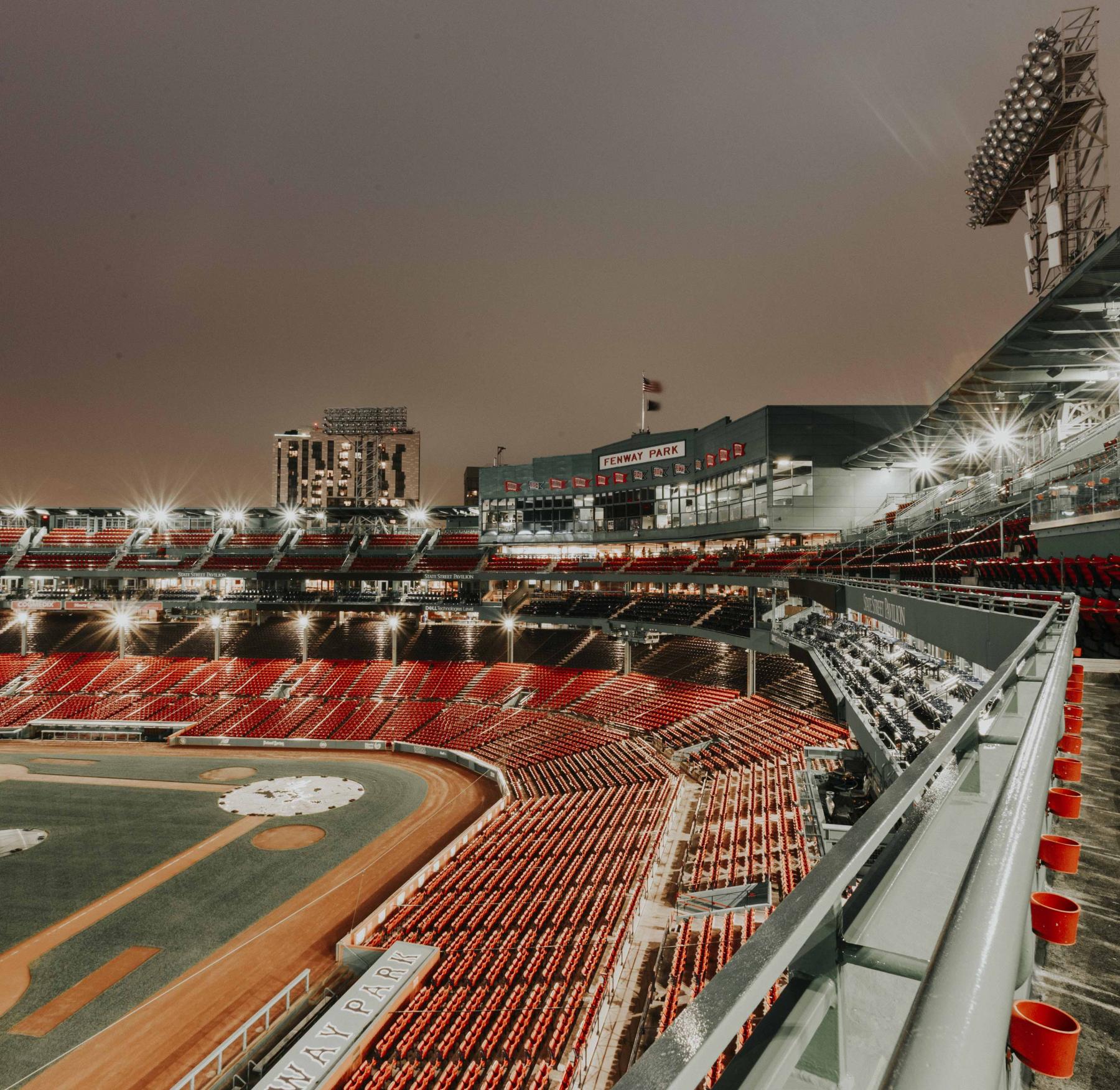 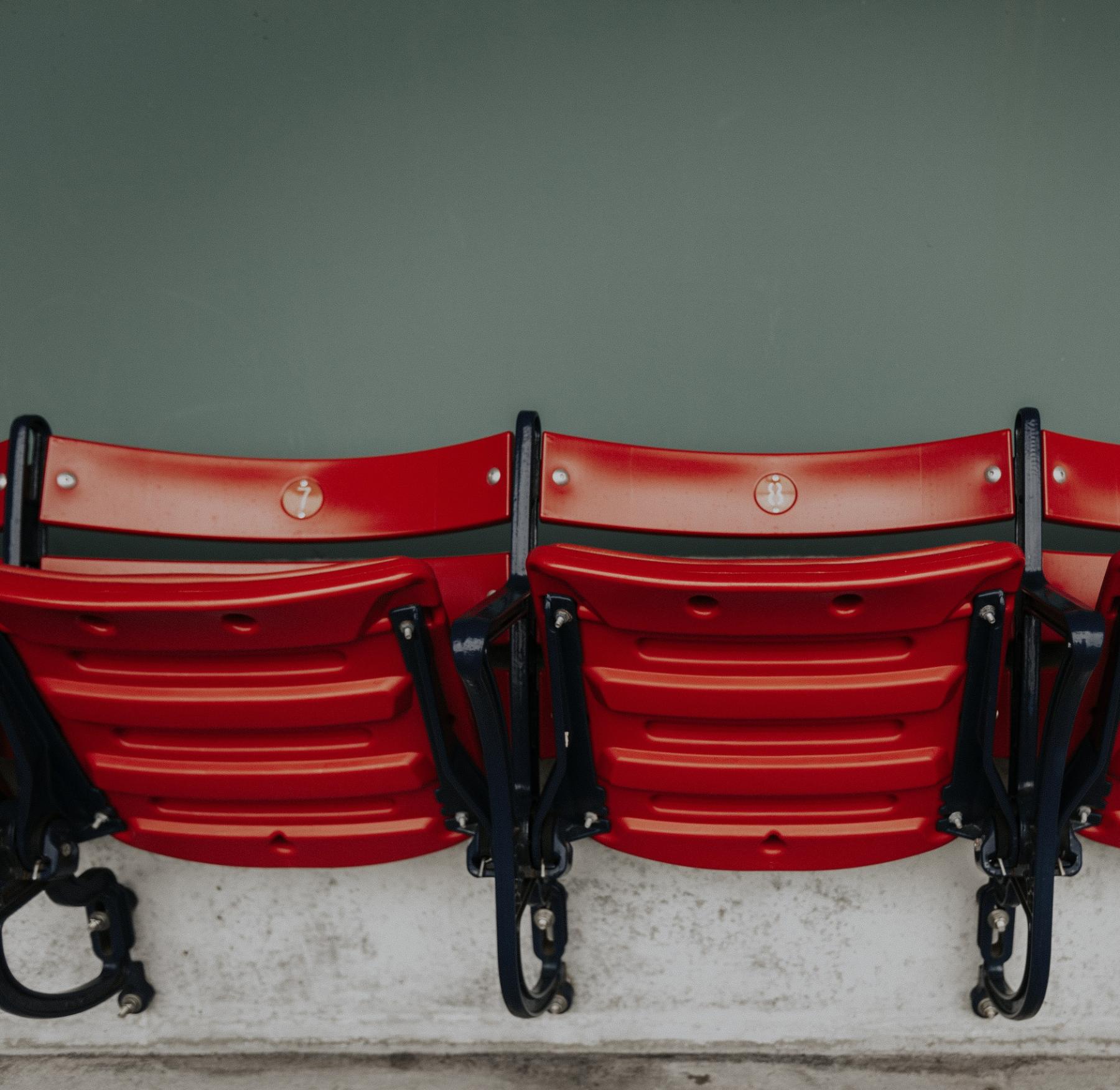 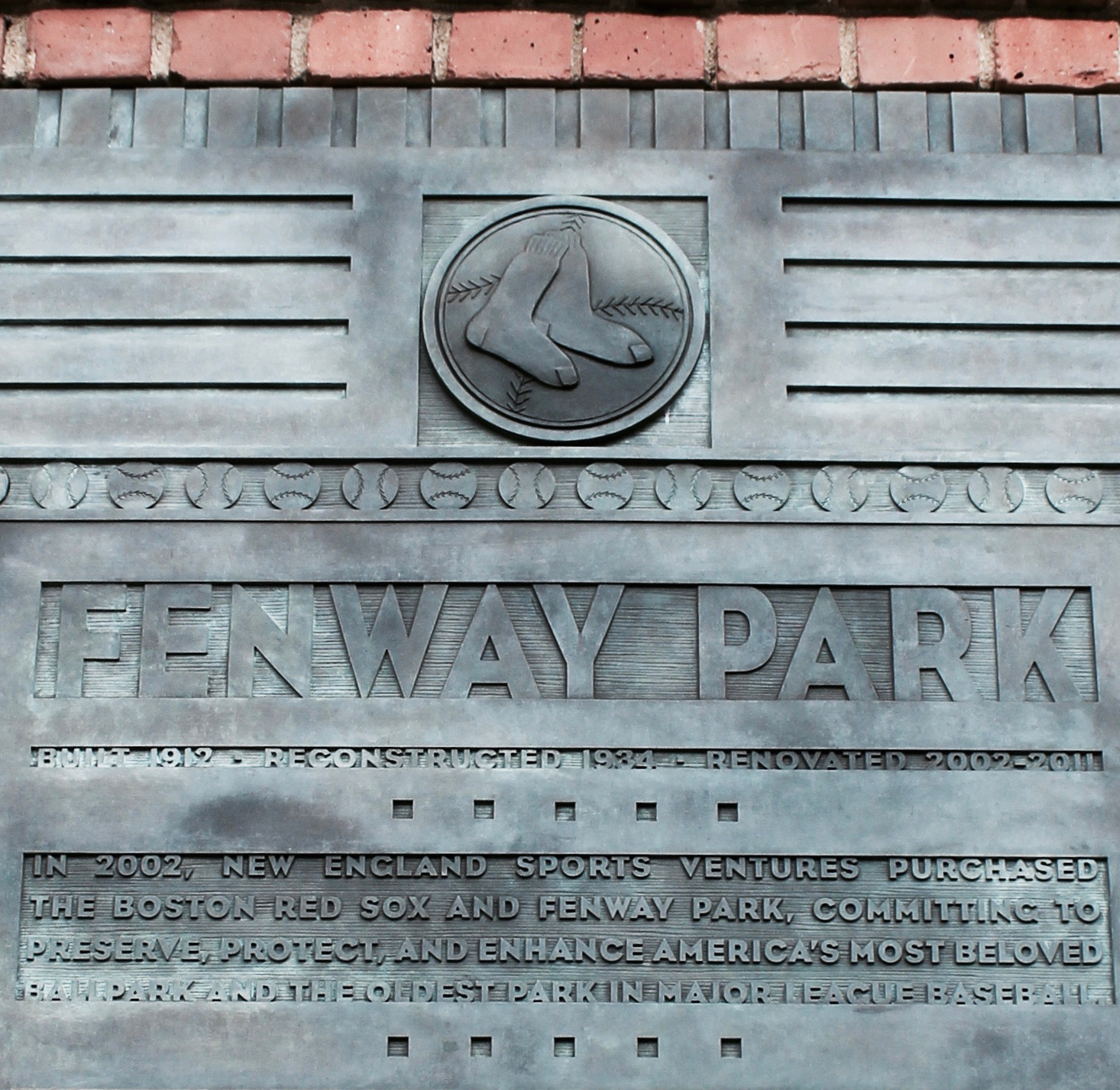 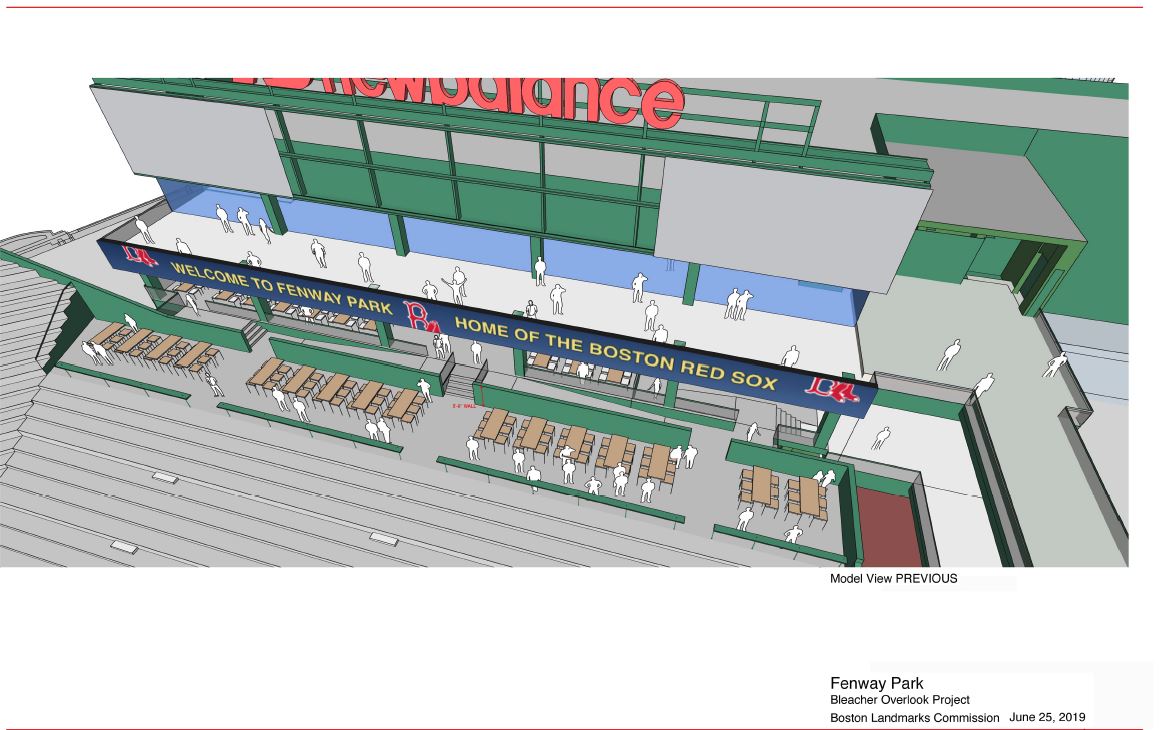 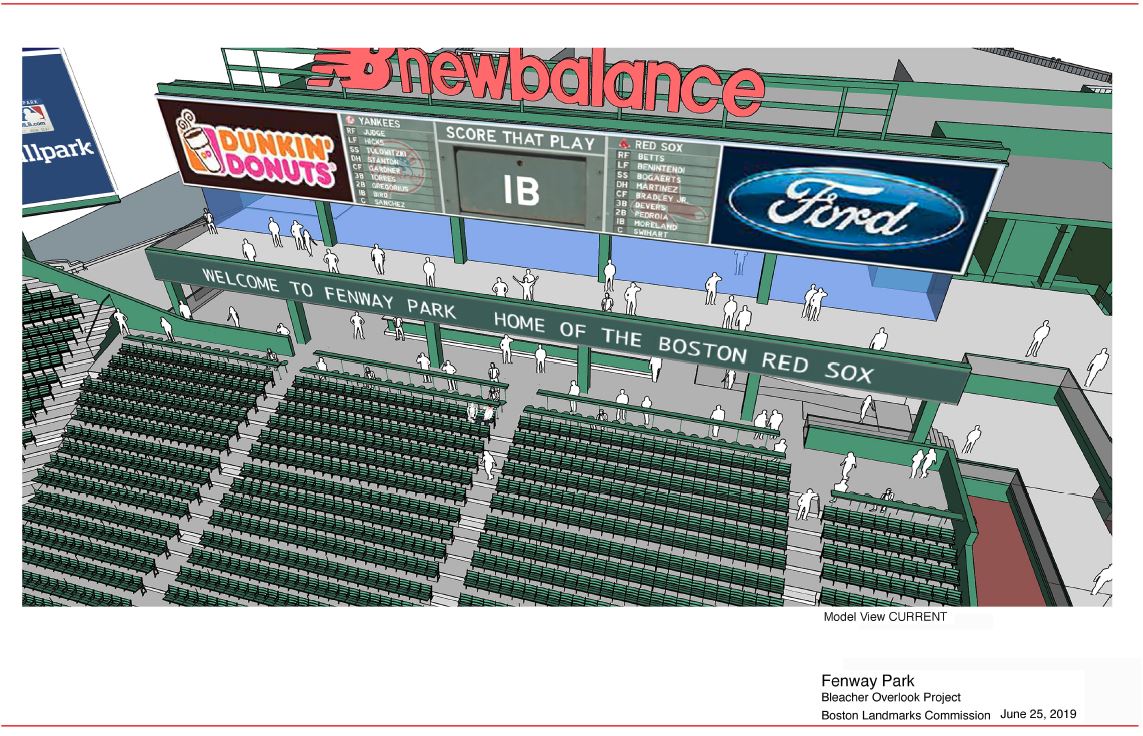 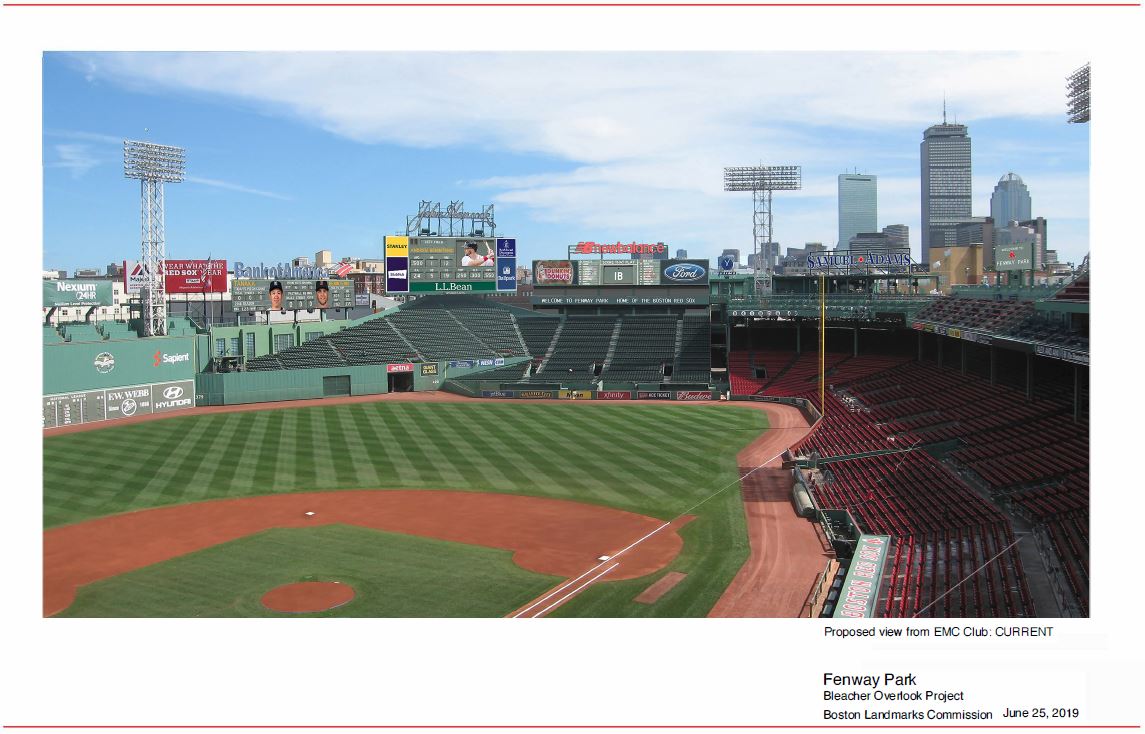 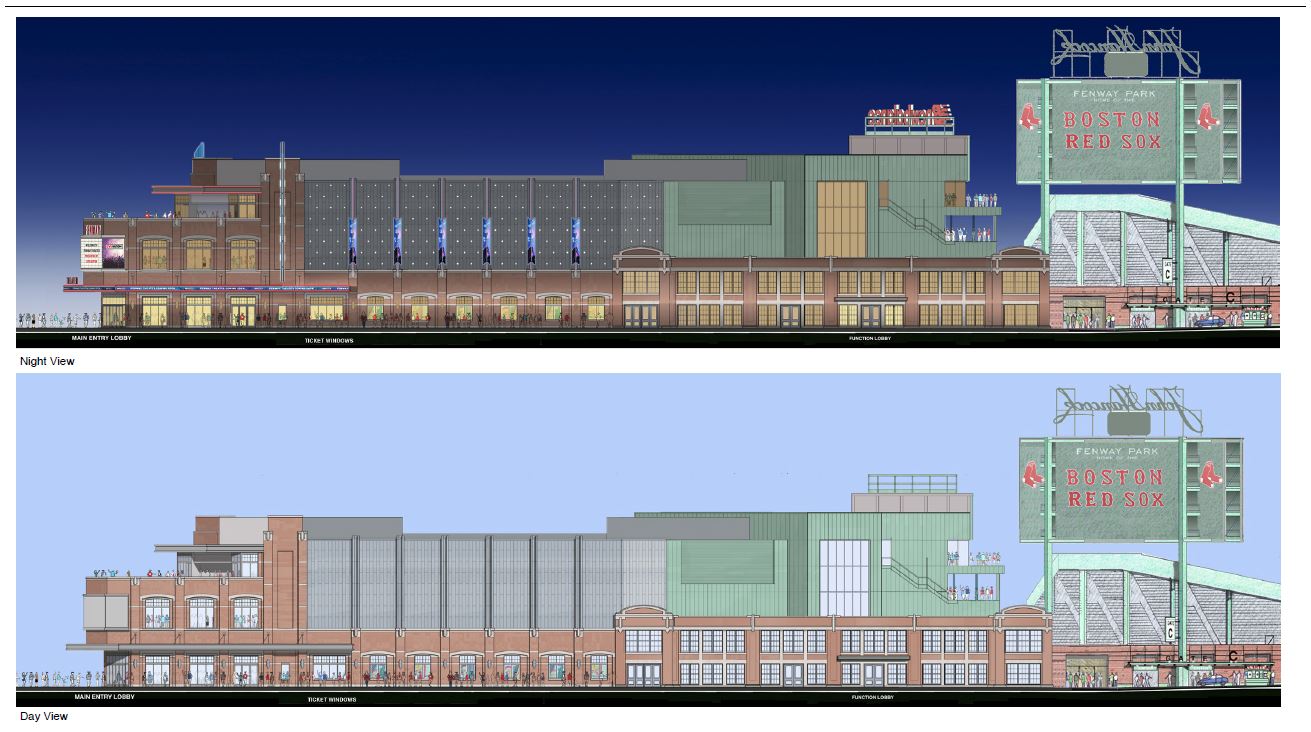 Landsdowne Street Elevations with proposed changes 6.14.19
Thank you to all our corporate members, including: