Reimagining a historic monastery, church, landscape, and shrine, this project brings a community in Brighton back to life, centering history in their program.

A hilltop expanse now known as The Overlook at St. Gabriel’s in the heart of Brighton was once home to the Passionist Order of the Roman Catholic Church who in 1909 built an impressive monastery in the Spanish Mission style, unique in the Boston area. The Passionists employed the accomplished landscape architecture firm Olmsted Brothers to design a park-like green space including a circular drive in front of the monastery, a cemetery for members of the Order, and a park along Washington Street. Elements of these features remain today as highlights of the new complex. In 1929, the Church of St. Gabriel was constructed in the ornate Neo-Renaissance style with colorful stained glass and soaring cathedral ceilings. Rounding out the historic complex is the Fatima Shrine, completed in 1969 by a group of laymen who continue to use the building today. The monastery building was designated a Boston Landmark in 1989.

By 2016, when Cabot, Cabot, and Forbes began envisioning a new future for this site for much needed housing, the Roman Catholic Church had deaccessioned the campus and the complex was in a state of abandon and deep disrepair. To bring the monastery building back to life the team had to address extensive damage from years of water infiltration including rot and mold, as well as asbestos, lead paint, and animal damage. They found creative ways to overcome challenges for reuse of this building, preserving original fabric when possible and selecting complementary new materials as needed. The church building, which was also suffering from neglect and extensive deterioration, was originally slated for demolition. After further discussion with a variety of preservation advocates, the owner reconsidered and chose to transform the church into a focal amenity space for residents and community members. With both the monastery and church restored and the landscape brought back to life, the heritage of the site becomes a central part of its identity, the buildings are sensitively restored for active use, and the neighborhood can once again be proud of this significant Brighton historic site. Read the Alliance log below to see our all documentation of this historic site.

“Imparting new life into a 14 acre site containing remnants of an Olmsted landscape and challenged by a 24,000 square foot church and Landmarked monastery, both deteriorated after 5 years of abandonment, requires a commitment to preservation. Add hundreds of units of new housing and you have a new mini-neighborhood anchored to its history,” say Greg Galer, Executive Director of the Boston Preservation Alliance. “CCF embraced collaboration and responded to much of the advice of community and advocacy groups such as the Alliance to balance preservation, resisting temptation for demolition. The result? A church, once claimed as unsalvageable, serves a central community use and the Landmark Monastery once again houses residents, bringing a complex once thought too far gone back for future generations to add their stories.”

St. Gabriel’s Monastery, built in the Mission style in 1909, anchors the complex that contains many other historic features including landscaping designed by the Olmsted Brothers as well as St. Gabriel’s Church. From our earliest conversations with the project proponent, we reiterated the site’s significance and urged for preservation of the context and features. We feel that the most historically significant resources on the site will be successfully preserved and rehabilitated by this project and we have expressed our support for the plan. Throughout the review process we have had close dialogue with the Brighton Allston Historical Society and helped them achieve some of their goals. We feel that the proposal meets both historic preservation and housing needs while giving this abandoned property a new life, and we encourage the proponent to continue to work with the community as the project comes into fruition.

Alliance Executive Director Greg Galer shares supportive remarks at an event celebrating Brighton’s award-winning preservation project known as The Overlook at St. Gabriel’s. Galer highlighted the role of the preservation community in the success of the project, noting the skilled trades men and women who brought these derelict buildings back to life. The historic church that was once slated to be demolished is now the focal point of the campus, joining the Landmarked monastery and Olmsted Brothers landscaping to tell the history of the site while inviting new visitors and residents to experience the spaces. In fact, the campus is already 90% leased, in no small part to the unique historic character that was painstakingly preserved.

The restoration and rehabilitation of the monastery is complete. Photos attached below. The church is estimated to be complete in early September.

The Alliance continues to advocate for National Park Service approval of the project. We see the loss of the retreat house as a reasonable compromise given the many benefits and preservation aspects of the larger project. We have been in dialog with the State Historic Preservation Officer (SHPO), the National Park Service, the proponent as well as their preservation consultant to try and break the logjam. We are concerned that lack of NPS tax credit approval may threaten the preservation aspects of the project.

Cabot, Cabot, and Forbes provides Alliance with update on project. Federal tax credits for the project have not been approved by the National Park Service who is urging them to keep the retreat house, a building neither the Alliance nor local or state officials consider significant. Alliance offered assistance.

Alliance staff attends Zoning Commission and speaks in support of the project. The Commission votes unanimously in favor.

Alliance staff attends Zoning Commission hearing and speaks in favor of zoning changes to allow for a Planned Development Area. The vote was postponed but later approved.

Alliance staff attends Boston Landmarks Commission for Article 85 hearing. The demolition delay is ultimately not imposed on the retreat house but the Commission urges proponent to try and save the carriage house on Washington Street.

Alliance submits comment letter in support of zoning changes and the creation of a Planned Development Area to facilitate the project.

Alliance staff attends public meeting and speaks in support of the project because it preserves the historic monastery, church, shrine, house, cemetery, rosary walk, and landscaping.

Alliance submits comment letter to BRA in full support of the project.

The Alliance submits comment letter to BRA expressing appreciation for the proponent’s efforts to work with the community and support for saving the church building.

Alliance staff continues dialogue with the proponent and the community as changes are made to the project.

Alliance staff and Board members meet again with proponent to hear updates to the project. They continue to study rehabilitation of the church as well as redesign of the new construction.

Alliance staff gets update from proponent. Secretary Galvin has toured the site and asks the team to keep the church building, so they are reevaluating. Alliance staff reiterates the importance of the church on the site- it communicates with the Landmarked monastery building and anchors the historic context and sense of place.

Alliance staff and two architects from the Alliance Board meet with several members of the project team. The most recent plans are presented and discussed. Alliance feels the new designs are too generic and urges the team to pull more inspiration from the historic architecture. The team explained that the structural report did not conclude that the church building could not be saved, but that it would be expensive to rehabilitate it and could make the project infeasible or might necessitate another building on the site. The Alliance urged the team to fully evaluate all options, including saving the church.

Alliance hosts a meeting with Cabot, Cabot, and Forbes and representatives from the Brighton Allston Historical Society. The proposal is discussed, particularly the historic church on the site. Alliance staff urge the proponent to conduct a structural report to support their decision to demolish, and to explore alternatives to demolition. The proponent is urged to rehabilitate the Pierce House on the property. Alliance staff feels the project is overall beneficial to the historic resources on the site and the neighborhood.

Alliance staff attends Boston Landmarks Commission hearing with a presentation from Cabot, Cabot, and Forbes about their proposal. Staff asks for a site plan and speaks with the proponent after the hearing to set up a meeting.

The Alliance becomes aware of the proposal through an update from the Brighton Allston Historical Society. The group expresses concern about the historic resources on the site like the church and landscaped grounds. 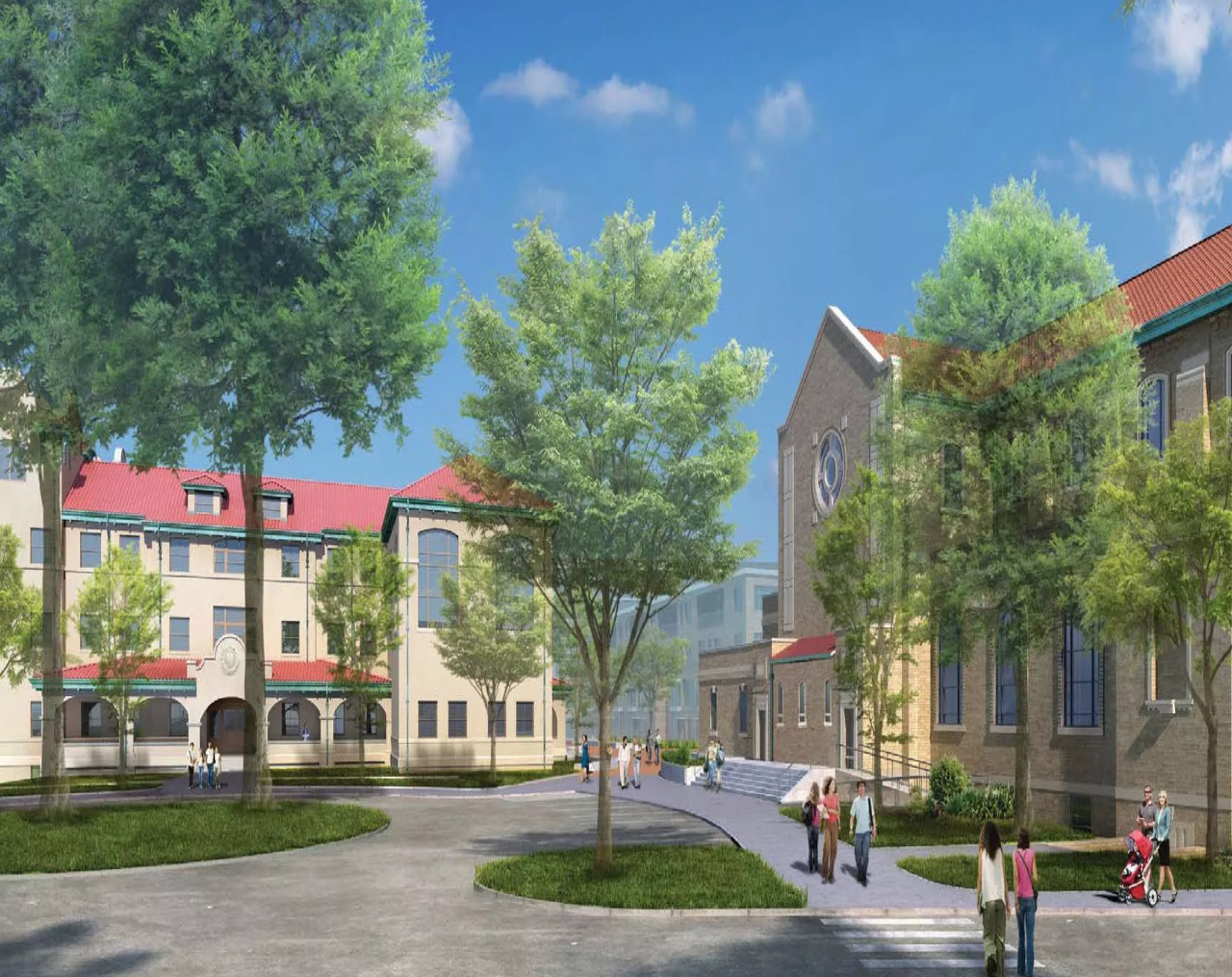 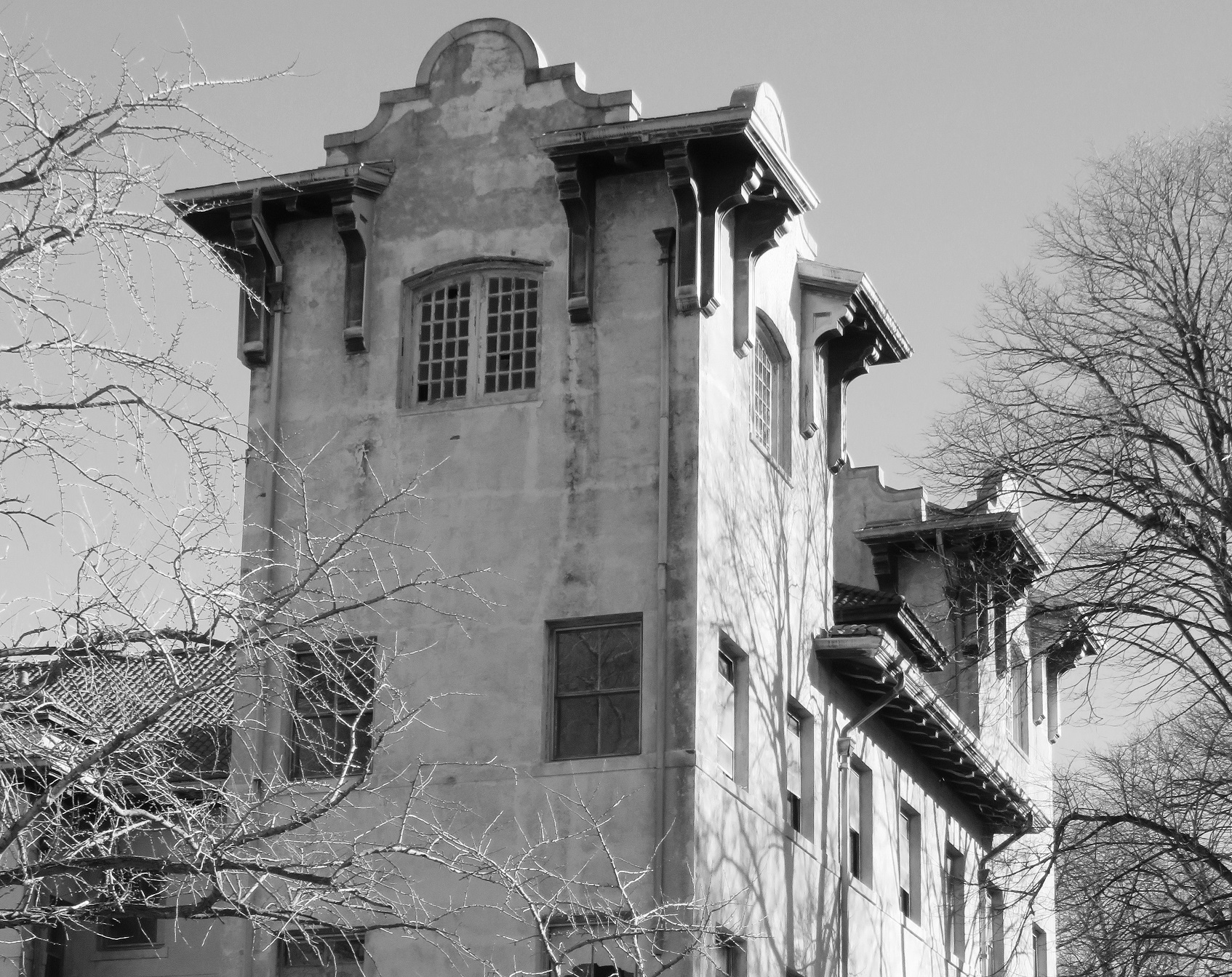 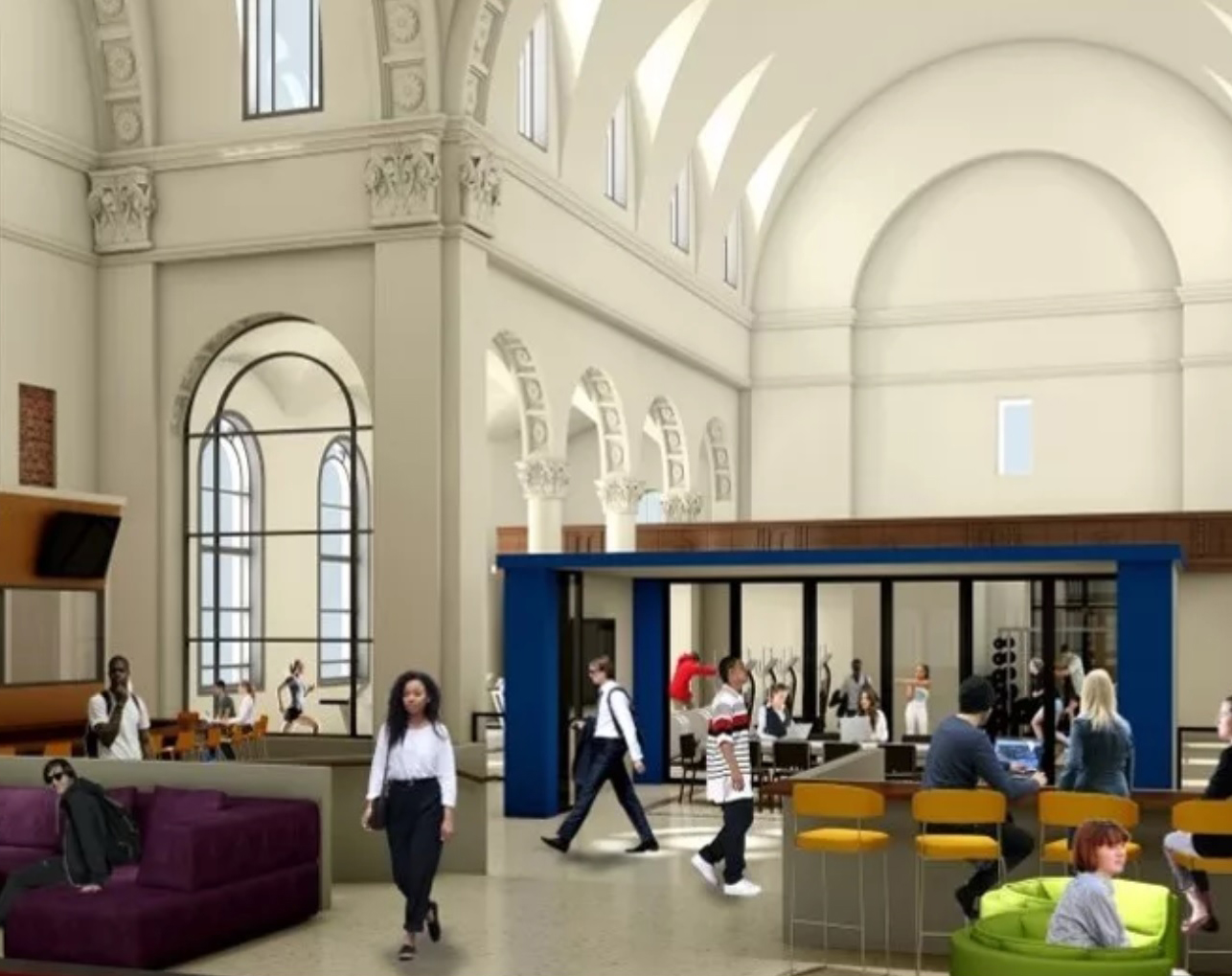 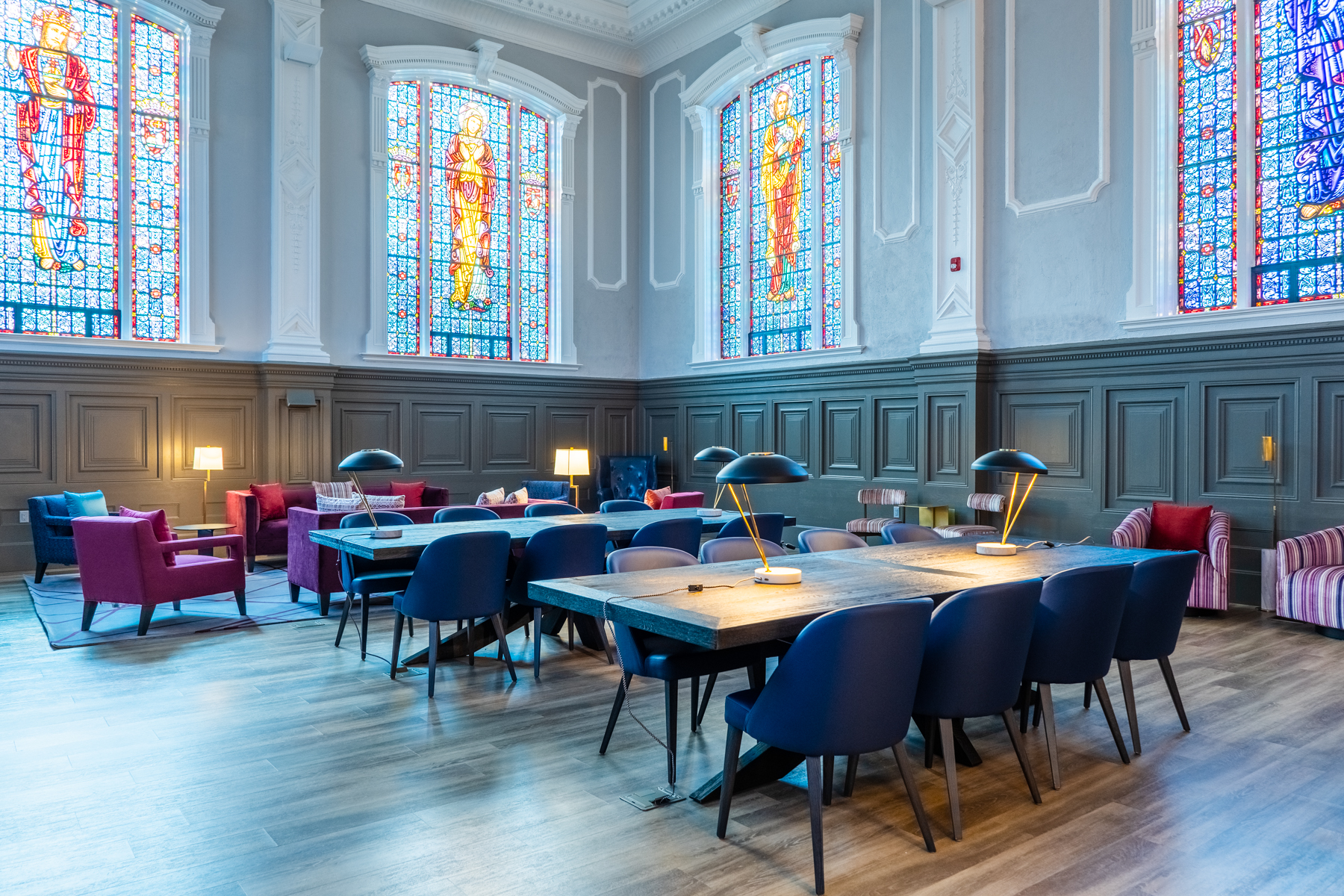 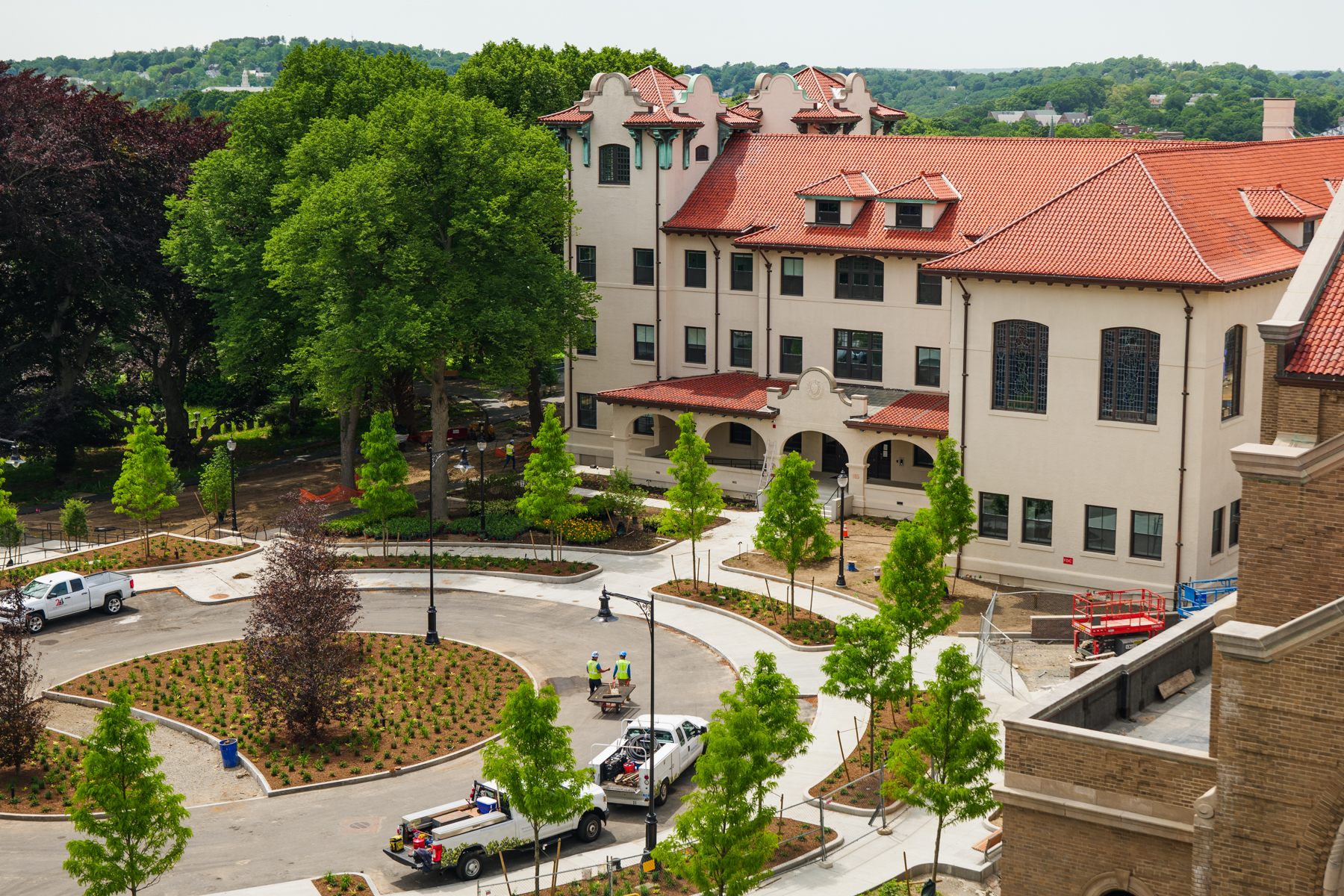 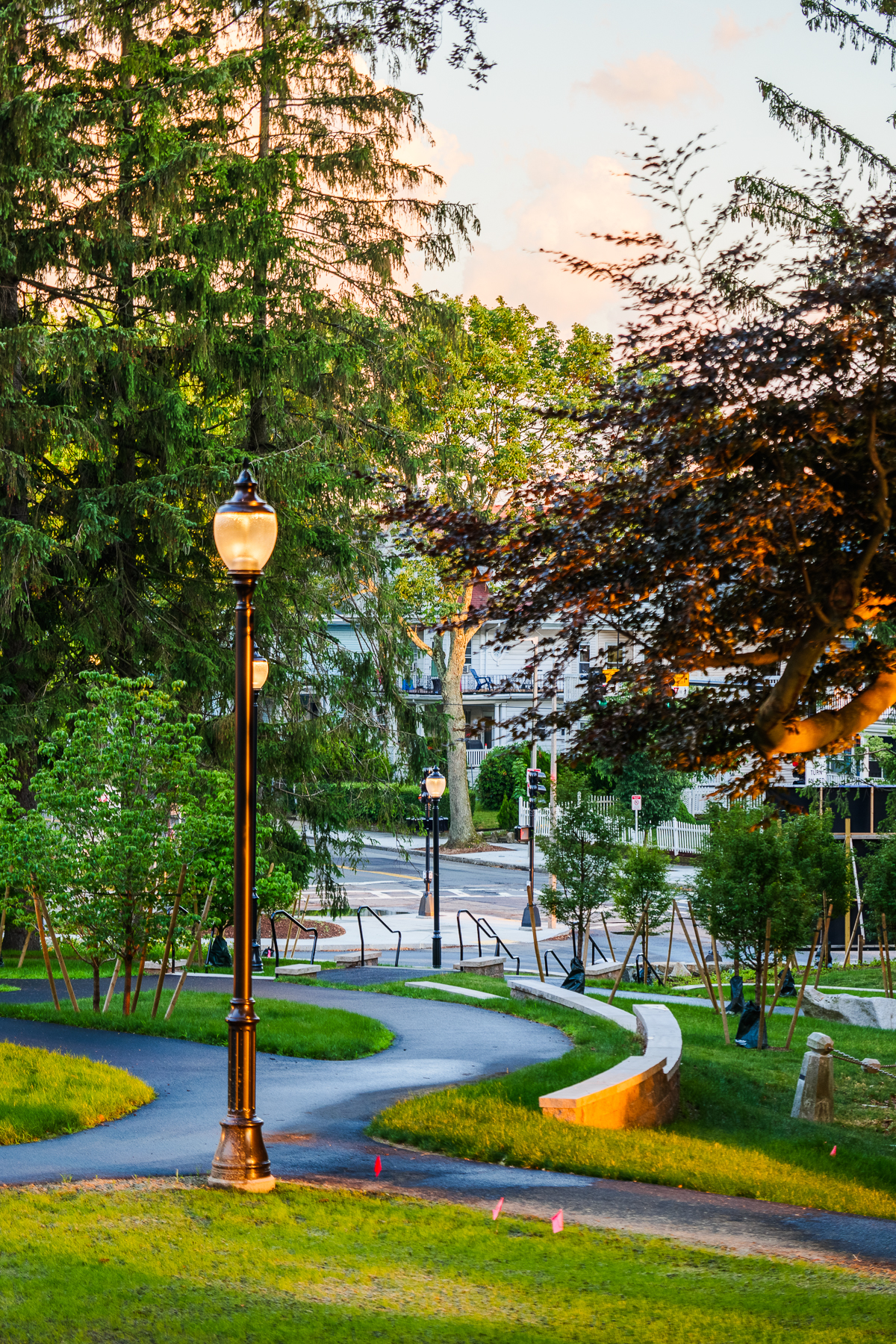 Preserved landscaping and open space. Photo via Cabot, Cabot & Forbes
Thank you to all our corporate members, including: