The Ladder Blocks in downtown Boston is a series of parallel commercial streets running, like rungs on a ladder, each connecting Tremont Street to Washington Street. They contain historic buildings and streetscapes that preserve the late 19th and early 20th century retail feel of the district that has long been the bustling hub of New England. These iconic vistas have been repeatedly threatened by deferred maintenance and neglect, intentional blight by owners and developers, and incongruous new construction. In 2016, the Boston Preservation Alliance successfully nominated the Ladder Blocks to be listed in the Preservation Massachusetts’ Most Endangered Historic Resources Program to raise awareness for this unique district and the threats to its character.

Over a decade ago, a New York-based developer, Midwood Investments and Development, purchased several buildings at the corner of Bromfield and Washington Streets and has repeatedly proposed various iterations of a tower at this iconic corner. A proposal in 2008 called for 28 floors including three above-ground levels of parking but did not advance. The proponent returned in 2015 to reintroduce a new project, this one over 600’ tall. It was strongly opposed by the neighborhood and advocates like the Alliance. Midwood filed new plans in 2020 with a revised proposal that did not include parking but still exceeds the height limits (apx. 300’ feet vs the 155’ allowed by zoning) for this area and does not respect the historic character of The Ladder Blocks. The community has opposed this proposal as well, but it remains in the Article 80 process at the BPDA.

The Alliance has strongly opposed the towers proposed for this site for several reasons.

First, we find it unacceptable that a large developer can purchase several storefronts in the heart of historic downtown Boston and leave the buildings vacant and unmaintained for over a decade, and then use blight as justification for demolition and new construction. Rewarding self-created poor conditions and inadequate stewardship of resources with approval of a non-contextual, out-of-zoning design would be poor policy and disrespectful to this historic neighborhood. Despite claims by the proponent, the proposal does not appropriately engage with its historic surroundings.

Second, before the Covid-19 crisis, the BPDA was conducting a robust planning process for downtown, including The Ladder Blocks, called PLAN: Downtown. Guided by dozens of community members and advocates on an Advisory Group, the planning effort was reaching conclusion — moving in the direction of recommendations for height limitations in three areas of downtown defined as “character areas” to preserve historic integrity — when COVID disrupted the process which hasn’t been restarted by the City. With that plan in place, the parcels in these proposals would not have been allowed to be developed above 155’ and significant community benefits would be required. The current proposal for the Bromfield site disregards the height recommendations that had emerged from the planning process and does not embrace the goals set forth by that Advisory Group and the BPDA to “Preserve the cultural heritage and embrace the distinctive histories present in public spaces as essential to creating a unique and cohesive Downtown” or “Preserve historic building fabric and cultural institutions while advancing climate preparedness and resiliency measures.” Even though the planning effort is not yet finalized, projects should respect the goals outlined and the height limits supported by those involved, and projects should not move forward in the review process that propose otherwise. The City must restart and complete that planning process, but in the meantime, approving projects that fly in the face of the direction of the planning makes no sense.

Finally, after conversations about the current proposal with the proponent, members of the downtown community, the Boston Civic Design Commission, and the BPDA, the Alliance remains opposed to the project not only because of its excessive height (with no justified hardship for the necessary variances) but because the design does not complement or enhance the historic district. The minor setbacks at the upper levels do little to create a dialogue with its historic, human-scaled neighbors. The attempt at “greening’ the building with terrace plantings is inconsequential to the millions of people who will experience this building as pedestrians on the street, not users of the units, and the accentuated and illuminated interior stair on the proposed northern facade will be a distracting architectural gesture rather than a feature, further eroding the view of historic fabric as seen from iconic viewsheds like City Hall Plaza and the Old South Meeting House. The Alliance frequently supports new construction, but we cannot support a project that without justification negatively impacts a historic area  — a prominent and historic corner while also ignoring the concerns of neighbors, abutters, and community advocates.

Alliance staff attends BCDC design review where a similar presentation is given to what the Alliance subcommittee heard the day before, noting in public comments that we have met and we feel the project only makes superficial nods to the historic context of The Ladder Blocks.

A subcommittee of the Alliance meets with the project team to hear updates to the project and ask questions. The Alliance expresses concerns about a 303’ tower in an area zoned for 155’ in a historically sensitive context, noting that the modest setbacks may not provide enough visual relief for the height. The Alliance shares that they do feel the new approach to Bromfield Street is much more appropriate and better respects the historic fabric and feel of the street.

The Alliance attends a presentation to a subcommittee of the Boston Civic Design Committee (BCDC); presentation attached below. Commissioners commend improvements to design but still question height and ask for models that show the building in context. Alliance Executive Director Greg Galer provides public comments about historic fabric of neighborhood, fear of setting precedent for excessive height, and urges consideration of feedback from the PLAN: Downtown process.

The Alliance submits a comment letter, attached below. The letter opposes the current project based on excessive height and disconnect with the historic character of the neighborhood.

The proponent files a Project Notification Form (PNF), attached below, for the revised project.

The proponent files a Letter of Intent (LOI) with the BPDA briefly describing plans for a revised project at the corner of Bromfield and Washington streets. The new project is a 21 story tower for retail and offices and does not include parking.

The Alliance submits a comment letter, attached below, expressing many concerns about the proposed 700’ tower in a historically significant area zoned for no more than 155’.

The proponent presents the project to the Boston Civic Design Commission. The presentation is attached below.

A subcommittee of the Alliance meets with the project team to learn about the project and ask questions.

Alliance staff meets with members of the project team for an introduction to the project. 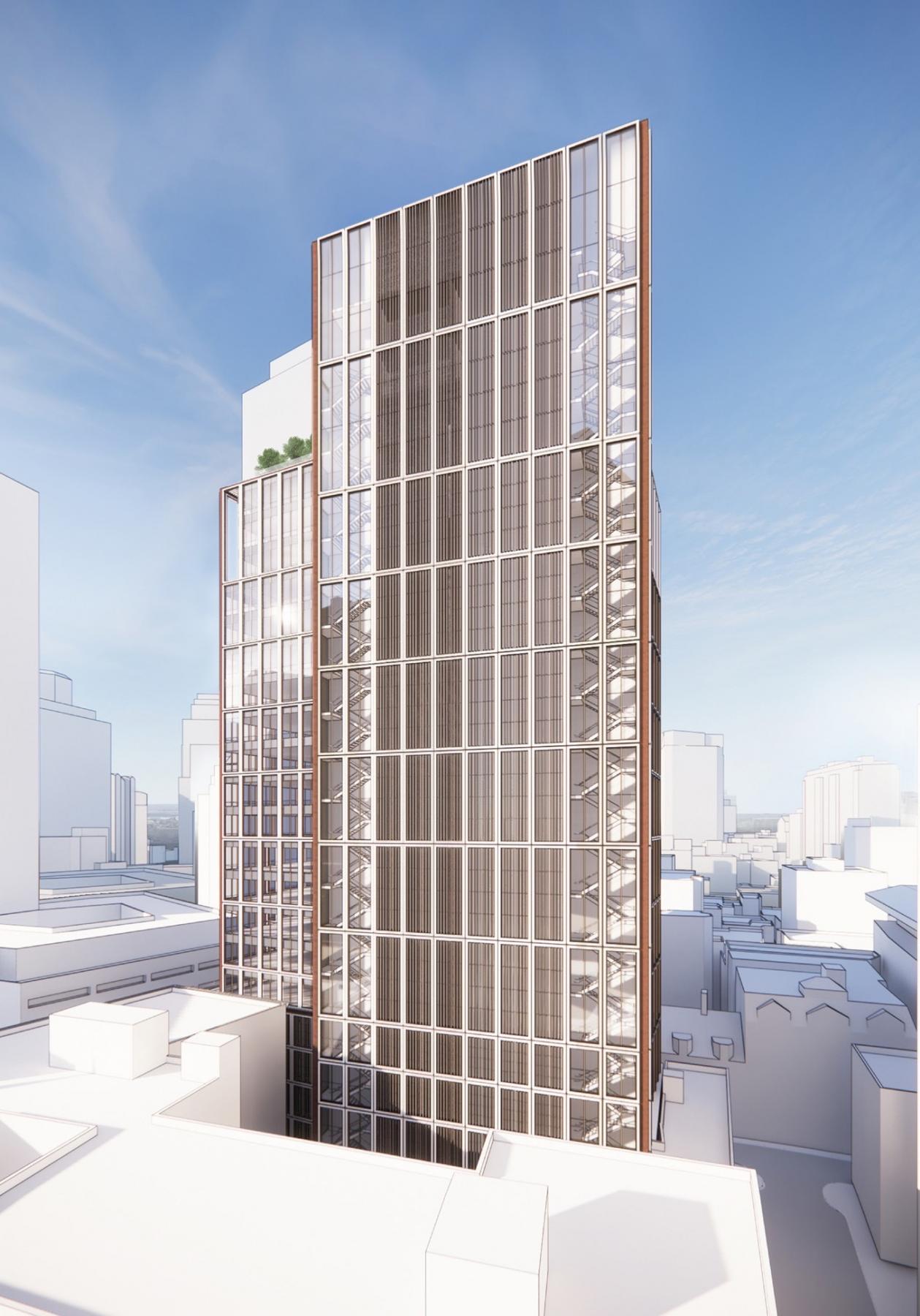 Corner of Bromfield and Washington streets- 2021 proposal, image via BPDA 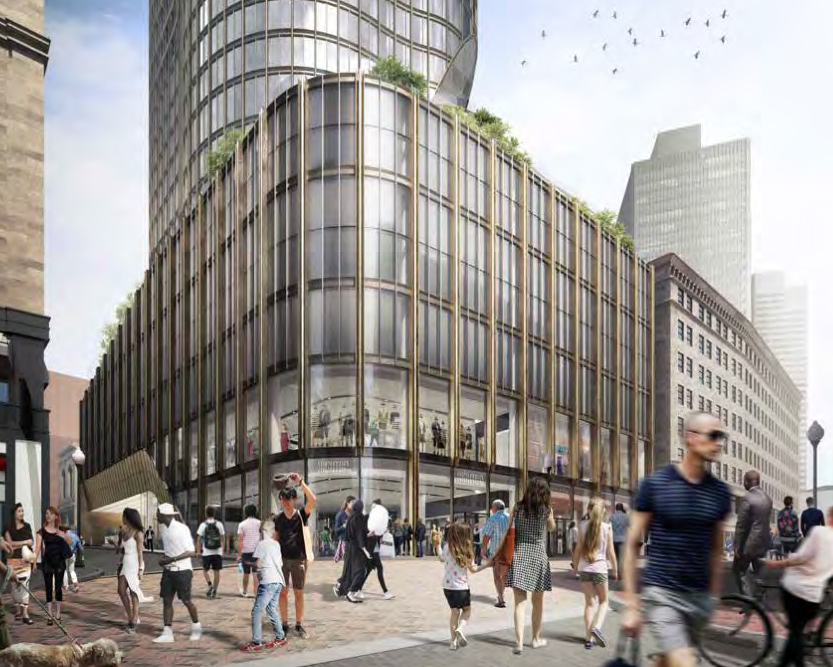 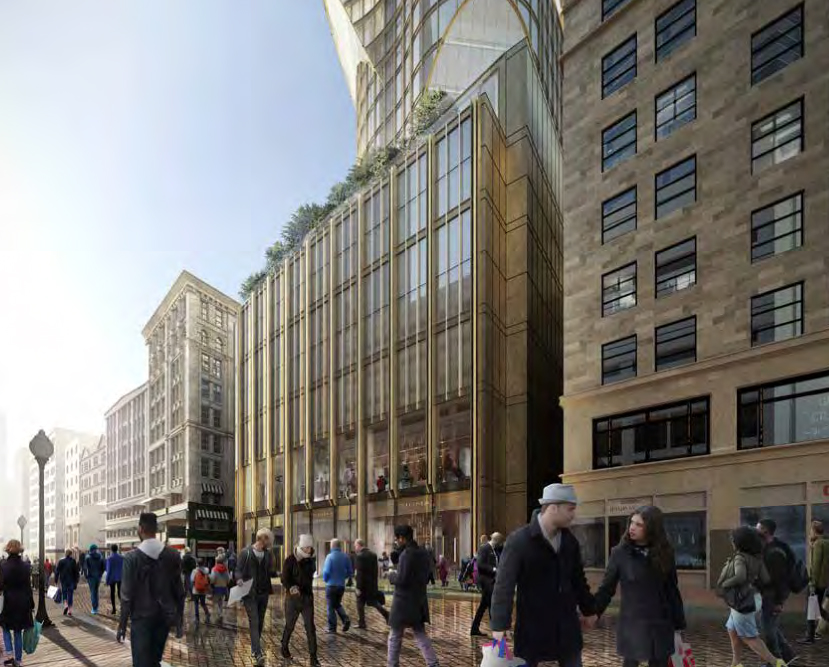 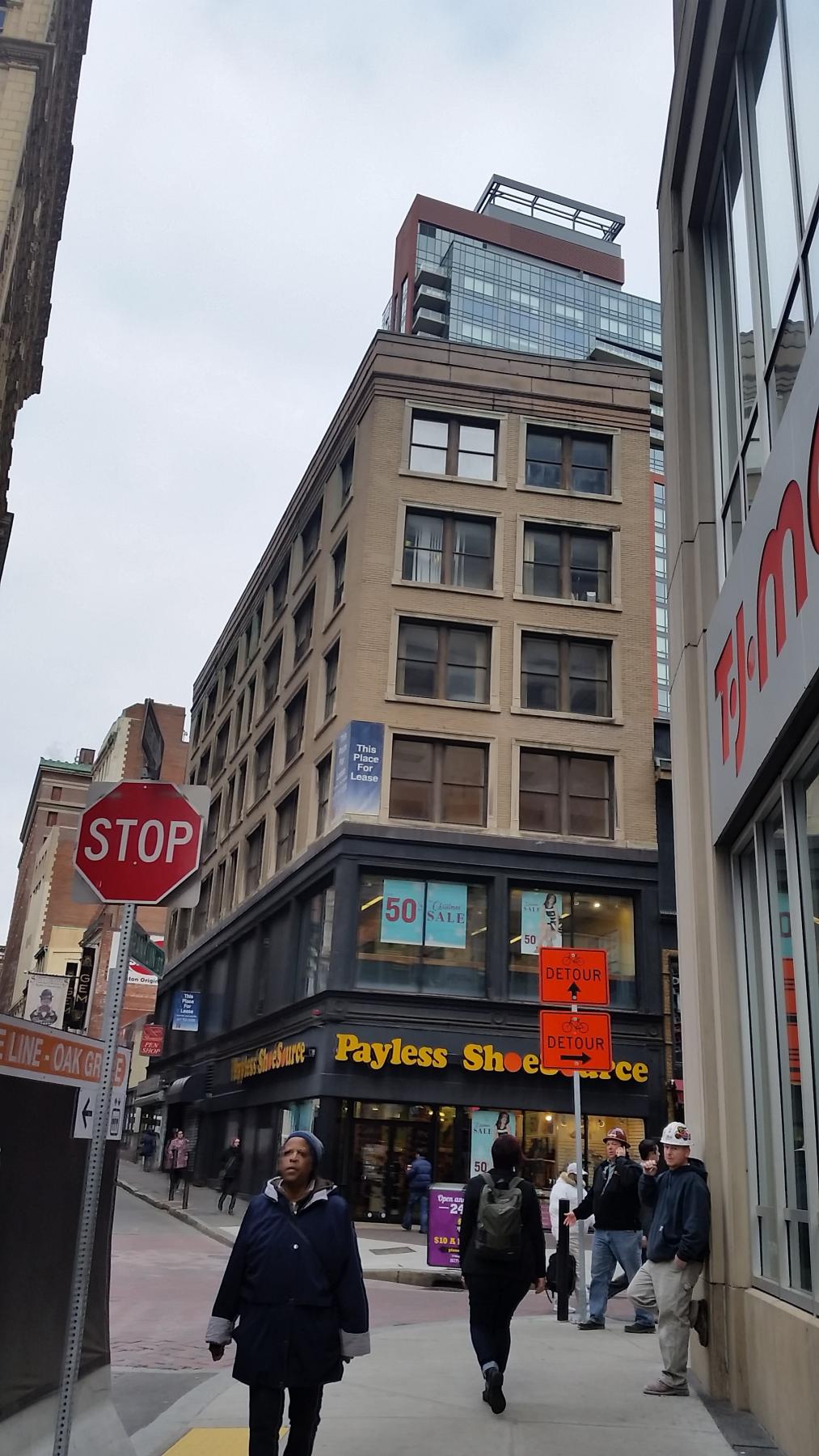 Existing building at corner of Washington and Bromfield streets, proposed for demolition 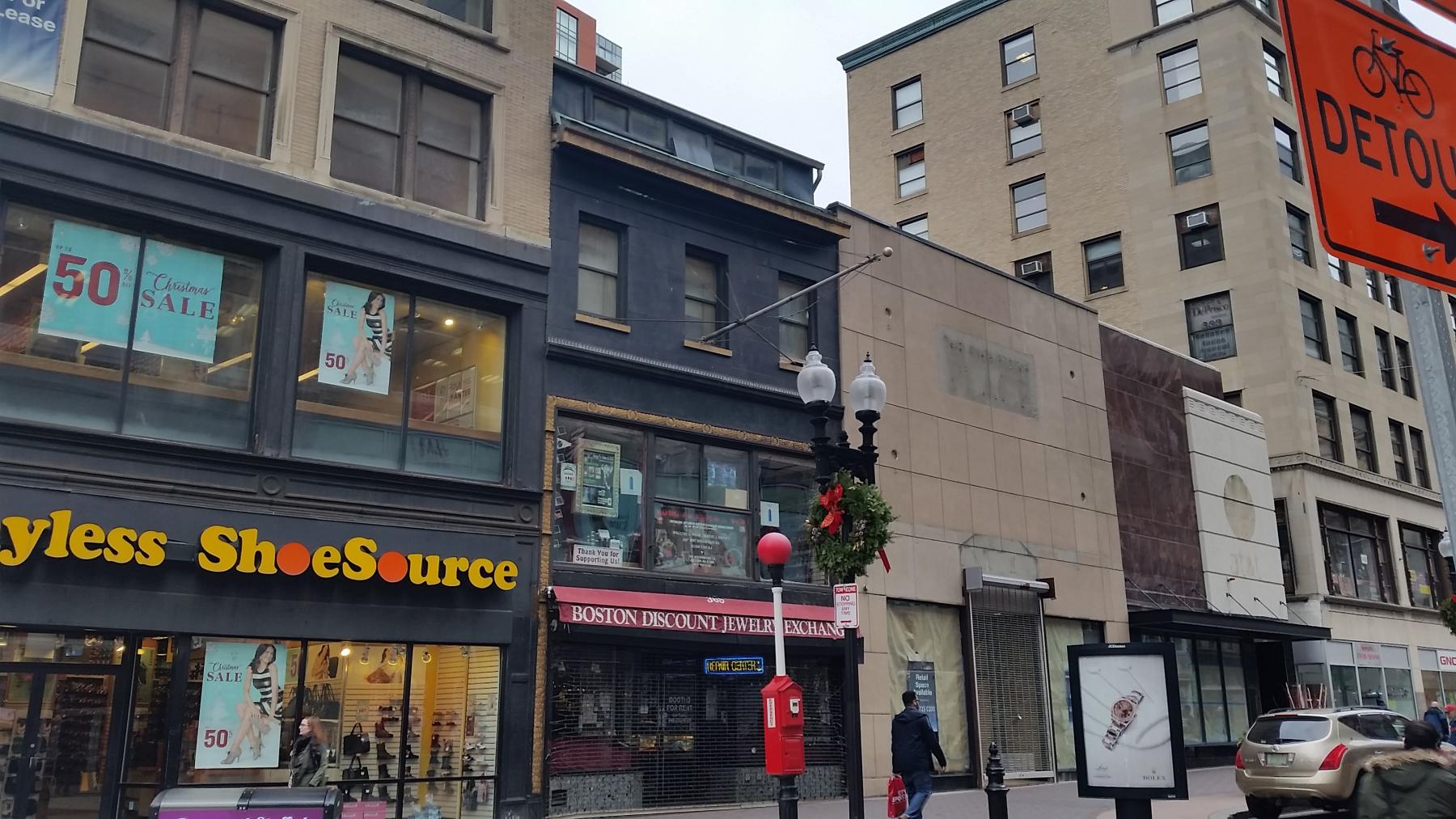 Existing buildings on Washington Street, proposed for demolition
Thank you to all our corporate members, including: