The rowhouse building at One Cumberland is within the project site for 220 Huntington Avenue, a proposed redevelopment of the Midtown Hotel. Just outside of the boundary of the St. Botolph Area Architectural Conservation District, a local designation that protects historic resources, this 1888 building contributes to the character and streetscape of the neighborhood. Initially when it was recognized that its demolition would be part of this proposal, the Boston Landmarks Commission explored the possibility of expanding the historic district boundaries to include the rowhouse, thereby providing the ability to protect it from demolition, but that effort proved non-viable. The Alliance urged exploration of a variety of options to save it, but none were viable either. Therefore the project moving forward will result in the demolition of the rowhouse as well as the Midtown Hotel for a new residential building with ground-floor retail.

More information about the project can be found at the BPDA project site.

Though some midcentury hotels have been successfully revitalized, like The Verb Hotel in the Fenway neighborhood, the Alliance did not feel that the Midtown Hotel, given its condition and location, made a positive contribution to the urban realm and chose not to advocate for its preservation. The proposed project better fills in the street “wall” — here an important aspect of the larger urban frame for the Landmarked Christian Science Complex, a uniquely successful and significant mid-century composition. The new proposal will also create a more pedestrian friendly urban realm with an active sidewalk. We did, however, feel that the residential building at One Cumberland to be worth preserving and have had many discussions with various stakeholders about how it could be either incorporated into the project or relocated to a nearby site. After much discussion and consideration, it was unfortunately determined that the building could not be successfully incorporated into the new design, and no site was available for relocation, leaving no other options but deconstruction and salvage. The Alliance has urged the proponent to carefully deconstruct the building and make materials available for other sites, potentially within the new pocket park in the project. Given the loss of the building we are now advocating for a significant contribution to the Legacy Fund for Boston.

Alliance Executive Director Greg Galer testifies at the Boston Landmarks Commission hearing as the Commission determines whether to impose a 90-day delay on demolition of One Cumberland. Galer explains our efforts to encourage inclusion of the building in the new project, relocation of the building in the neighborhood, or expansion of the historic district to protect the building. With no viable options remaining, Galer says that the Alliance does not support imposing the delay since it will not alter the outcome of the project but that we will continue a dialogue with the proponent about deconstruction and encourage a contribution to The Legacy Fund for Boston, a fund that supports preservation work around the city.

The proponent presents to a subcommittee of the Boston Civic Design Commission; presentation attached below. The subcommittee feels the project team has successfully incorporated feedback and is ready to advance the project to the full Commission for a vote.

Staff has a virtual meeting of the BCDC design review subcommittee where the design of the new building is discussed.

Staff has a virtual meeting with the project team to discuss options for saving the rowhouse at One Cumberland. Staff reiterates our desire to see the building remain on site, with the new building unattached to it to give it space. The proponent explains that when they first discussed this project with staff members at the City, they were told that preserving 236 Huntington was preferable to One Cumberland, so their pro-forma is structured around preserving one of the two buildings; reducing the size of the new building to preserve both of the existing buildings would make the project infeasible. With all other options explored, including moving the building to a new location, there seems no plausible way forward to retain One Cumberland. Staff suggests sensitive deconstruction and salvage, using the loss of this building for positive messaging about the importance of not sending reusable materials to landfills.

Staff attends a subcommittee meeting of the Boston Civic Design Commission and urges the proponent to reconsider demolition of the rowhouse- not only for historic preservation but for environmental reasons as well; the new building could be designed to give the old rowhouse some space to provide a better transition between the new construction and the historic district.

The Alliance submits a comment letter to the BPDA, attached below, noting concerns about possible shadow impacts on the historic Christian Science Center plaza and the demolition of the building at One Cumberland.

Alliance staff attends a virtual Impact Advisory Group meeting for an introduction to the project.

A Project Notification Form (PNF) is filed with the BPDA by the proponent outlining the proposed project. The PNF is attached below. 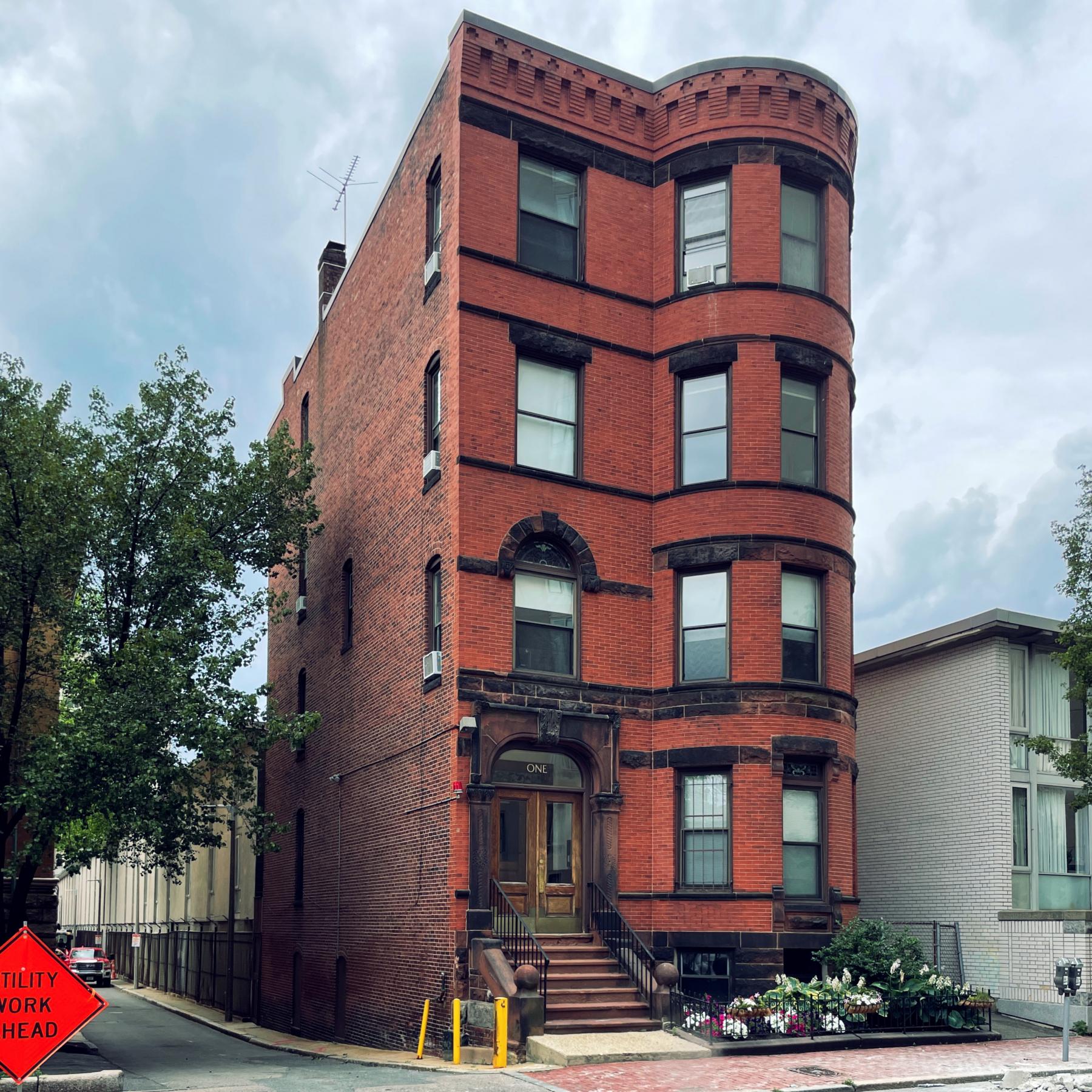 One Cumberland. Photo by Matthew Dickey 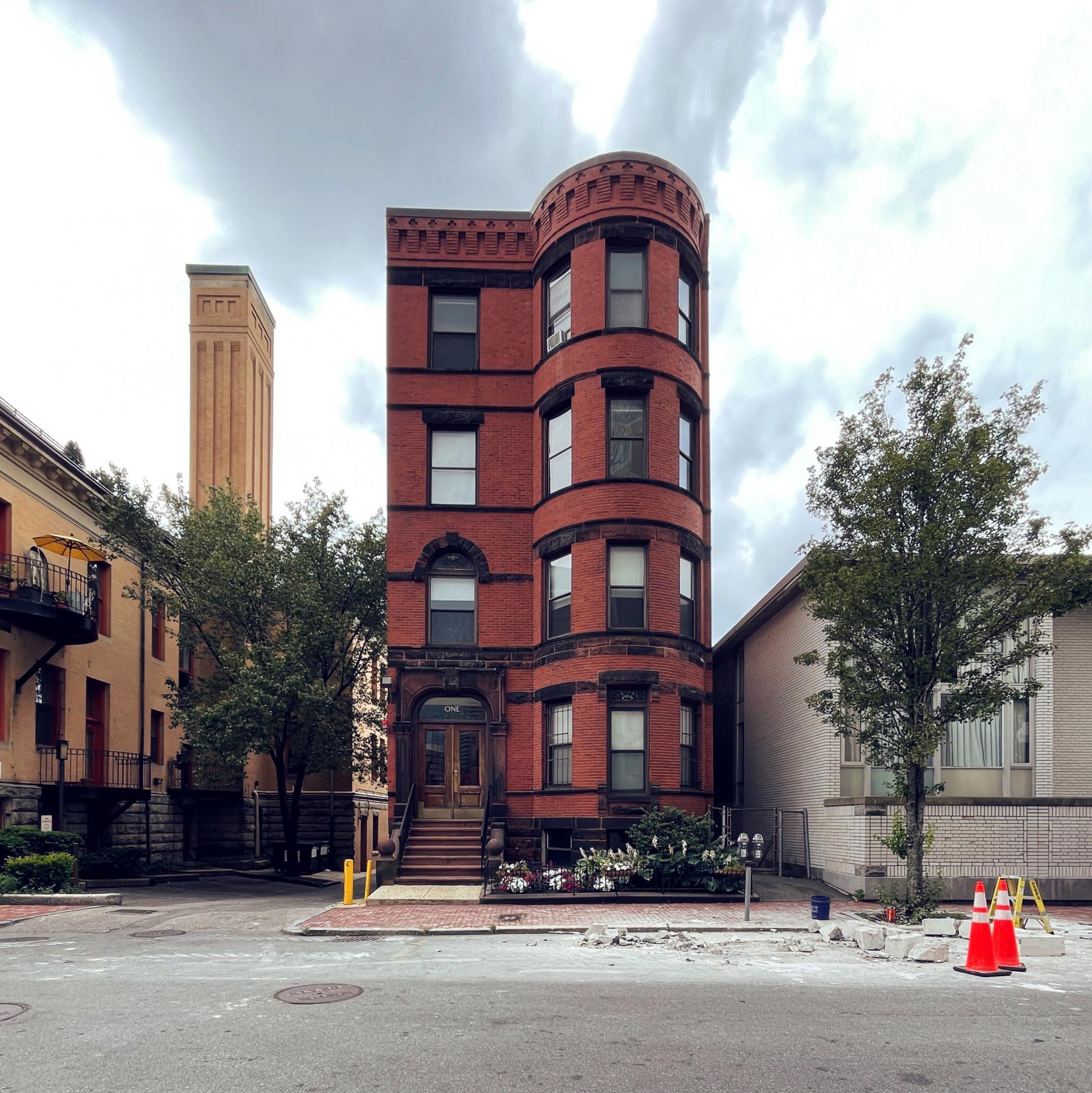 One Cumberland Facade, 2021. Photo by Matthew Dickey.
Thank you to all our corporate members, including: