Amrheins bar and restaurant is threatened with demolition. This iconic corner building and legacy business, operating since 1890 and the oldest restaurant and bar in South Boston, touts itself as having the oldest hand carved bar in America and the first draft beer pump in Boston. It is a destination for Bostonians and visitors alike, and one of the few historic buildings to survive intense, ongoing development pressure on West Broadway. It is a gateway to the South Boston neighborhood, steps from the Broadway T station, and a marker of the roots of the neighborhood as Southie evolves.

Like many other neighborhoods in Boston, insensitive development has compromised the character, history, and streetscapes of South Boston. While the Alliance supports scaled, contextual new construction, we strongly believe that a balance of old and new architecture creates vibrant neighborhoods with a strong sense of place. When the Alliance first became aware of the pending sale of Amrheins (in 2018), we reached out to the Boston Planning and Development Agency (BPDA) to urge preservation of the building (and hopefully restaurant) in a new project. Thankfully, we got a clear signal that the BPDA and elected officials agreed that preservation was important. We were pleased when the proposal for the project that was filed did not threaten these historic resources. A new building is proposed for the surface parking lot abutting Amrheins, with the historic building given a new, collaborative life with the old. New and old together - perfect!

However, there have been some voices in the neighborhood calling for demolition of the building, claiming it adds little more than sentimental value to some residents. We understand that these voices believe that removing the existing building will result in a lower height for the new construction, but the BPDA has refuted that assertion. City officials and local public realm advocates have also found solutions for widening the sidewalk and improving circulation that do not require demolition of the building.

In February of 2020, the Alliance’s Young Advisors gathered at Amrheins for their annual Heart Bombing event where they made valentines to show love and support for this special building, restaurant, and bar.

We urge those we agree with our position to write to the BPDA in support of saving Amrheins for future generations.

The petition to designate the Amrheins building as an Architectural Conservation District is pulled by the applicants. The applicants note that they are satisfied with the proponent’s proposal to preserve the two main facades of the building and the historic wooden bar.

The project is approved by the Boston Planning and Development Agency board.

Alliance staff attends an IAG meeting where updates to the project are presented. The outer two facades of the historic Amrheins building are still preserved in this version, with restored signage, copper, and window openings. A public outdoor space has been added, with an indoor community space for retail and/or public meetings. Some design details, like the materiality of the new building, have not yet been determined. The proponent is expected to go before the BPDA Board for approval on Thursday, June 10th.

Alliance staff attend a virtual public meeting about the proposal. Several elected officials are there or are represented by staff. Congressman Lynch speaks in favor of preserving the Amrheins building and the historic character of the neighborhood. The proponent describes a new building at just below 70’ for research and development use with only the outer two facades of the Amrheins building preserved. These facades will be restored with previously filled windows reopened. The new building will utilize the spaces behind the facades. At the ground floor there will be space for a local restaurant. There will also be retail space for local goods to be sold as an incubator space for small businesses. A letter from the Impact Advisory Group (IAG) is read aloud; it cites three major concerns but does not call for the demolition of the Amrheins building. Several members of the public comment and nearly all speak in favor of preservation, some in support of preserving the entire building and not just two facades, including testimony from Alliance Executive Director, Greg Galer. There are many comments about refining the design of the new building to be more contextual for the neighborhood and the historic Amrheins building. The next step will be review by the Boston Civic Design Commission.

Alliance staff attends another Impact Advisory Group (IAG) meeting. The developer shows a revised proposal. In this scheme, only the West Broadway and A Street facades of the Amrheins building are preserved. The rest of the building is removed and the new building is behind it. The new building, still above the 70’ that the IAG demanded at the last meeting, remains lab and R&D. The BPDA staff on the call explain that the BPDA, elected officials, the preservation community, and many other residents have all vocalized support for keeping the Amrheins building, though it has been well noted internally at the BPDA that the IAG sees no value to keeping it on site. The IAG is rigid in their position that a lower height for the new construction and a small, paved cafe seating area would be preferable to retaining the historic building. The proponent will present this scheme again at the upcoming public meeting. The IAG requests that the concept without Amrheins be included at the beginning of the presentation to the public.

Alliance staff attends an Impact Advisory Group (IAG) meeting. The BPDA project manager explains that after many discussions with staff, elected officials, advocates like the Preservation Alliance, and the community the BPDA is insisting that the Amrheins building remain because of its contributions to the history and character of the neighborhood. Many members of the IAG push back, reiterating that they feel the building is not significant. During the meeting it seems clear that overall, their major concern is about the height of the new building and they insist that 70’ should be the maximum height here to avoid setting a precedent for future development in the area. The proponent agrees to come back with a proposal for 70’, likely residential instead of commercial. Another IAG meeting and a public meeting will be scheduled for further discussion and feedback.

The Alliance submits a letter to the BPDA urging preservation of the Amrheins building in the new project. The letter is attached below.

The Alliance becomes aware of voices in the South Boston community calling for the demolition of the historic Amrheins building. The Alliance issues an AllianceALERT encouraging followers to write to the BPDA in support of saving the building.

Alliance Executive Director, Greg Galer, speaks with the developer, John Matteson. The development team is looking for a clear direction from the neighborhood and though their plan all along was to save the building, they are hearing some call for its removal. Greg explains that the Alliance does think that building is meaningful and will be advocating for its preservation. Dialogue will continue through the review process.

Alliance staff attends a public Impact Advisory Group (IAG) meeting to learn more about the proposed project, which incorporates the historic building. Though the Alliance is pleased with the proposal’s preservation approach, there are some voices on the IAG who feel the building is not significant to the neighborhood and should be demolished.

The Alliance becomes aware that Amrheins is up for sale and corresponds with BPDA staff to urge preservation, who assure the Alliance that neighborhood and historic context will be a part of the conversation. 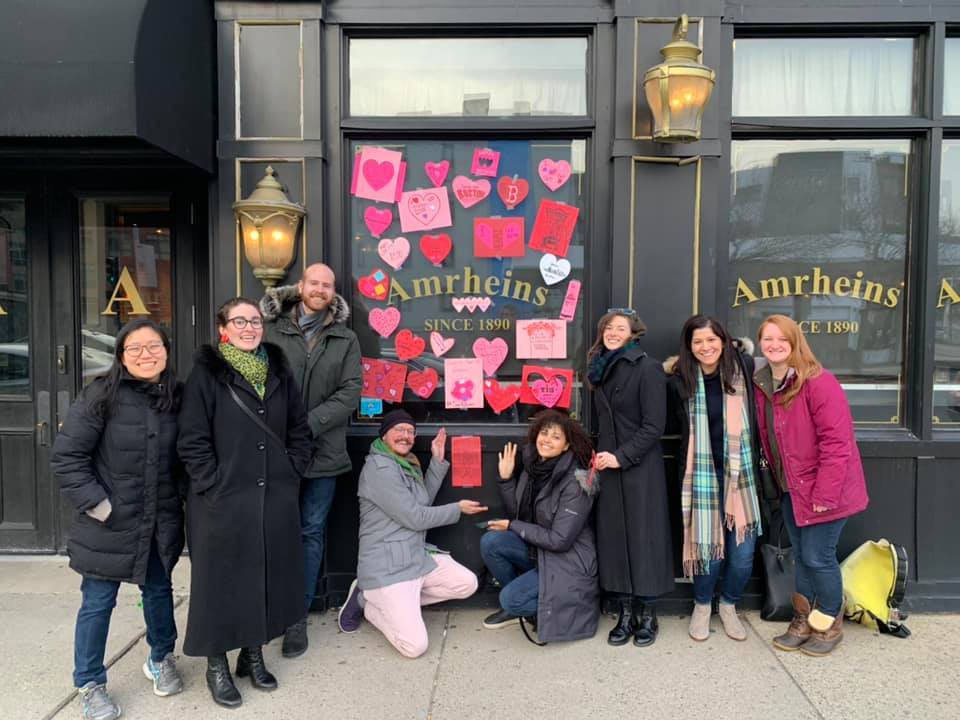 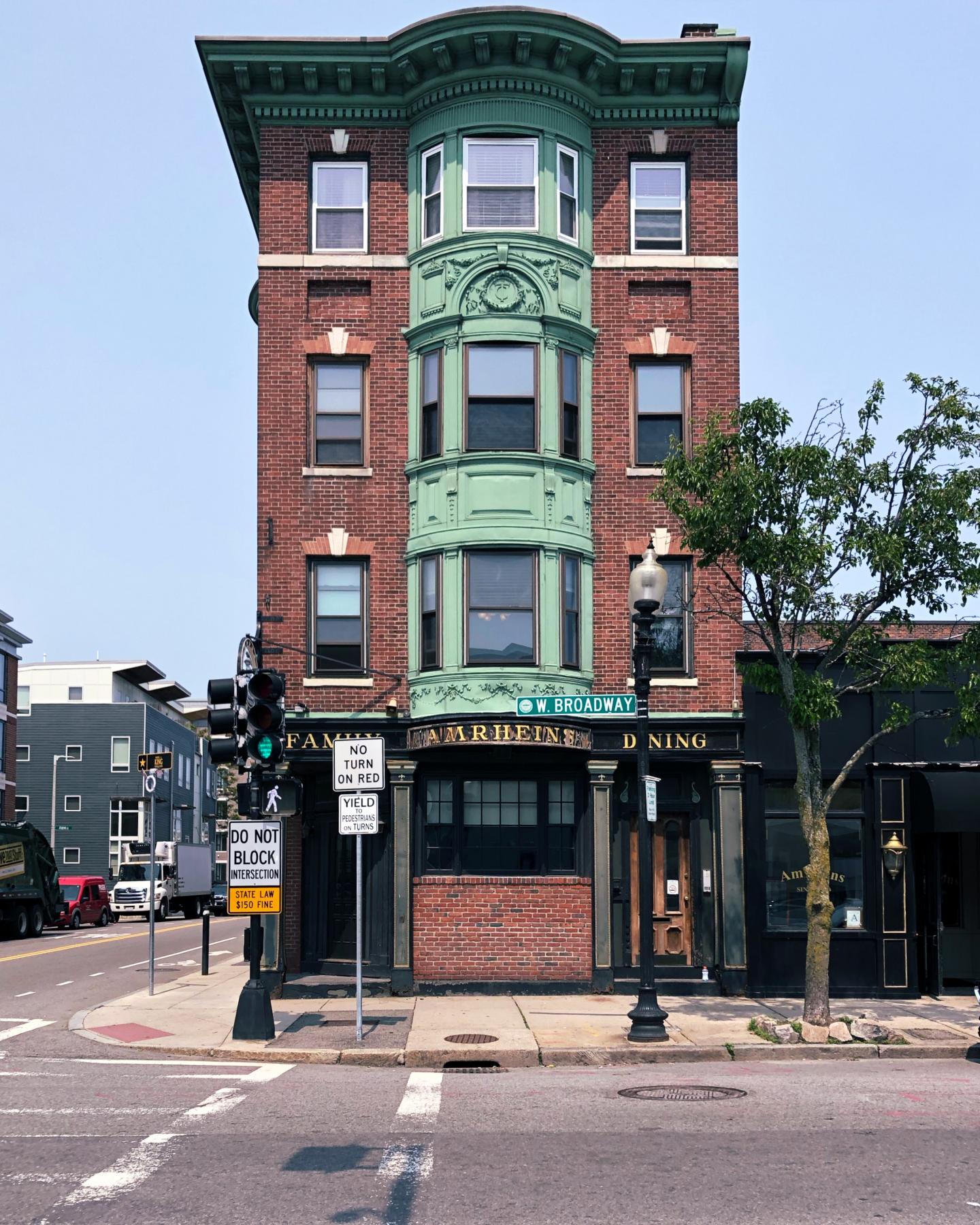 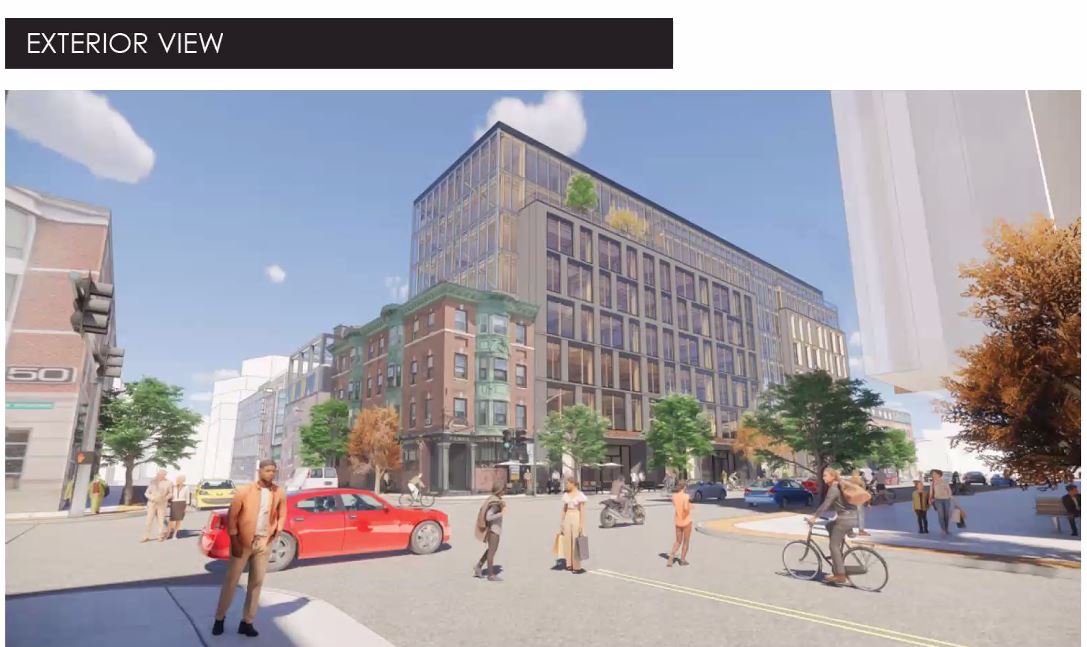 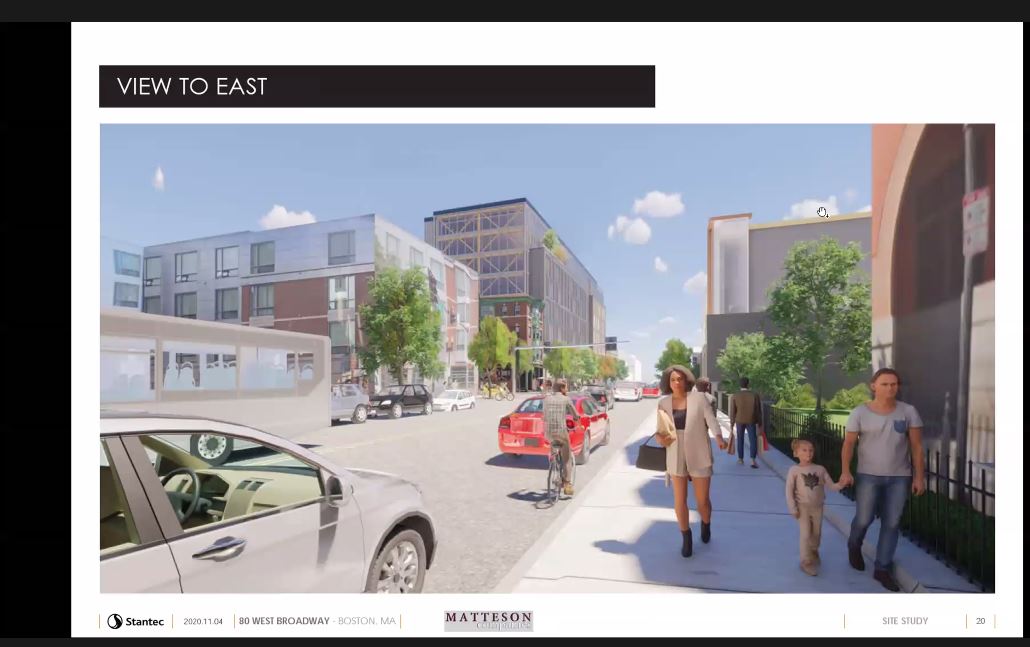 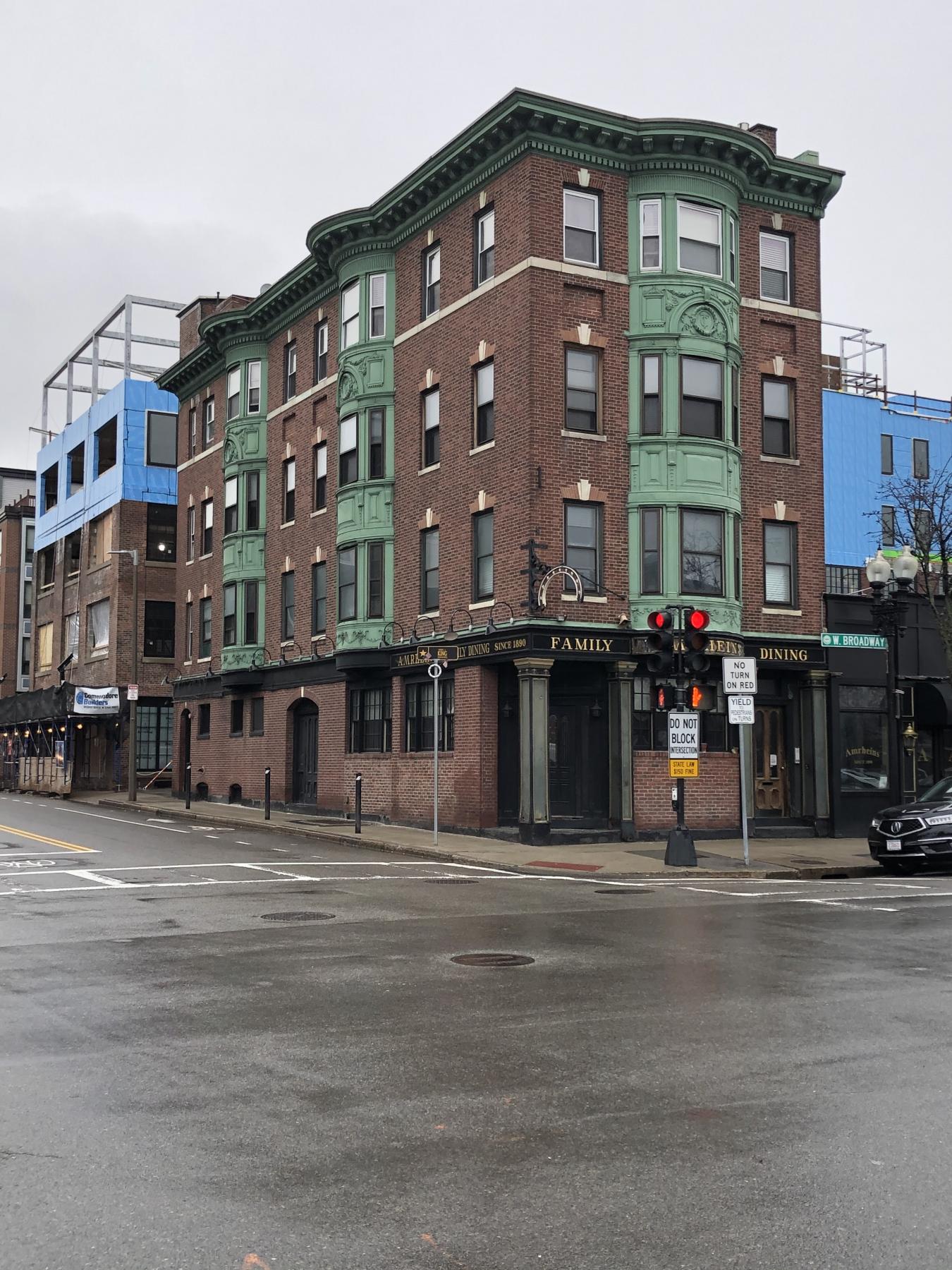 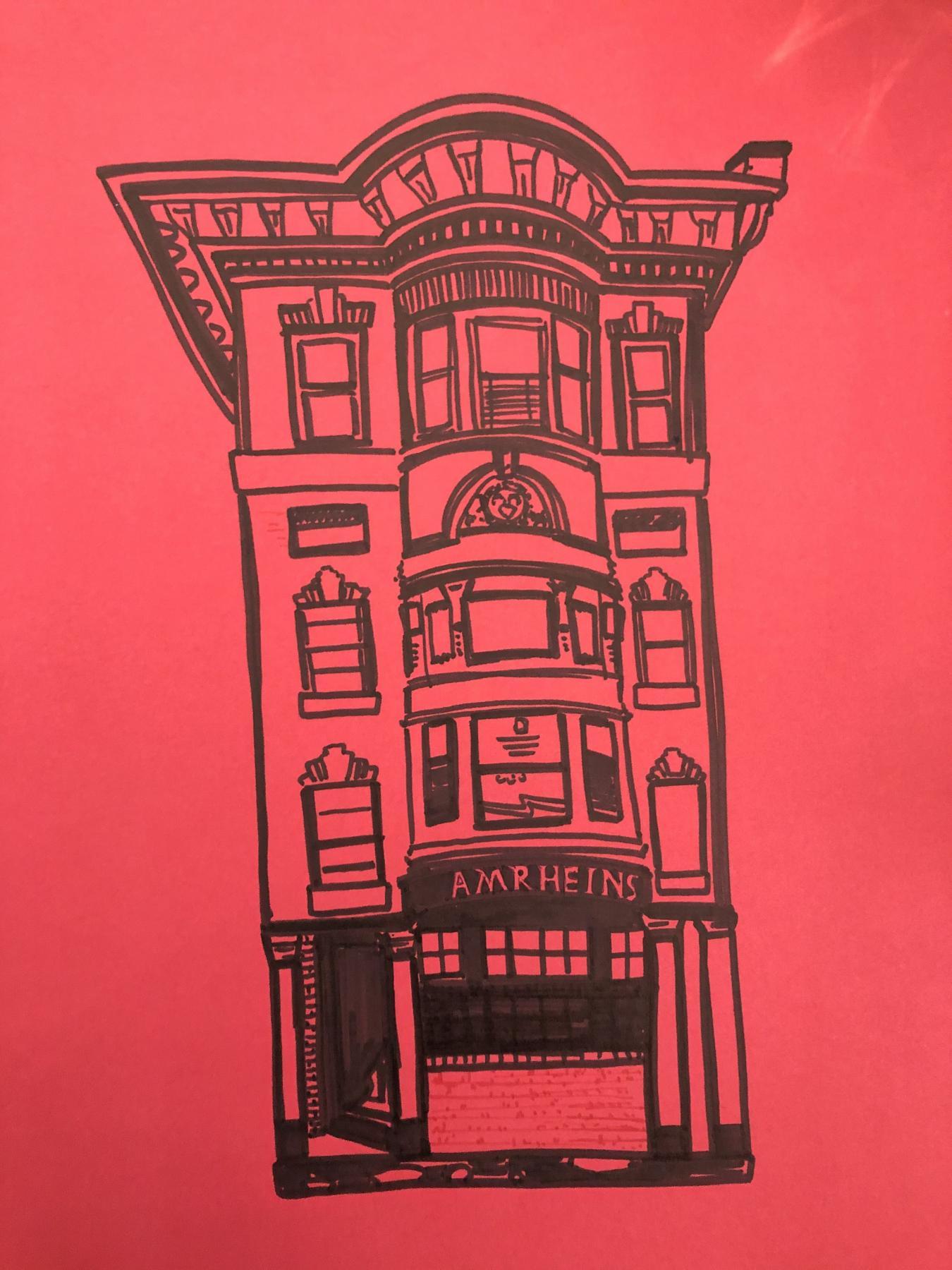 Amrheins, by Ruth Nan (@ruthienan on IG)
Thank you to all our corporate members, including: